UnNews:Swiss experiment shows no difference in the behavior of heterosexual and homosexual mice when married or unmarried 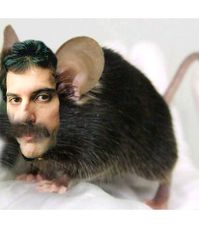 ”Experiment on me darling!”

ZURICH, Switzerland -- With so much change in the world regarding our attitudes to marriage and relationships, it is hardly surprising a mouse may feel the same way. Scientists in Switzerland have found startling new evidence to suggest mice have no respect for the institution of marriage in much the same way as humans. The report suggests humans are nearly as disgusting as mice.

We spoke to Dr. Heidelbergen of the University of Zurich who told us, "our experiment has given us the conclusion that marriage is as useful as being poor in Switzerland! We obtained two mice couples who were living together but not married. We held an expensive wedding for one of these couples with all the little relatives of those mice, it was romantic and I felt like a father giving away his daughter actually. Before long, we compared this relationship to the other mouse couple who were not married, the results were the same, they had sex and ate cereal all day and sometimes sex was in the bowl of cereal"

Dr. Heidelbergen then swapped the two females over to see what would happen, to see whether the male mice would even notice their partner had gone - "we watched closely behind a screen, we hoped that some terrific, wonderbar thing would happen, we hoped we could prove that the married mice would resist the unmarried mice. In both cases it was the same; they touched noses, they had sex and ate cereal all day and sometimes sex again was in the cereal.

Mice, faced with infidelity, don't appear bothered. When both couples were reunited it was as if they accepted their naughty behavior and moved on. The final experiment was to put the two males and two females together - "the last experiment was the most interesting, the two males touched noses, they had sex and ate cereal all day and sex was MOSTLY in the cereal bowl. Soon, more boy mice appeared, there was music and some white powder all over the cage, the lighting system was so impressive with the glitter ball, it was amazing. My two males grew extra whiskers on the top lip and one dark colored mouse had big teeth and a powerful squeak that I swear was in tune and he appeared to be the leader. I enjoyed his show, so energetic and proud to be a gay mouse. I picked this one up and he suddenly became shy and wouldn't squeak when I talked to him"

We watched the video of the experiment and sure enough, it was as Dr. Heidelbergen said. Though the final question was: What happened to the two females? - "Oh very simple!" he explains - "When I tried to film the two females they looked at me and said, 'Fuck off we're talking!'"

So it seems, males are sexual monsters whatever the organism and girls just wanna have fun. Are mice to be envied though? Who can say they had a wonderful fling and returned home to have a quiet bowl of Coco Pops with their partner? Only a mouse can testify to that.