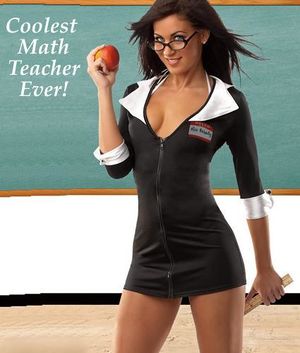 SIN CITY, Nevada -- In a psychological study of an emerging problem, the molestation of students (some as young as three years old) by female teachers, researchers have ascertained that the motives of the molesters is sexual lust.

Some do not consider molestation to be molestation, Dr. Ima Groper challenged Good, when it involves “good-looking women.” Her own son, Sydney, she says, “would love to be approached by his ninth-grade sex ed teacher, Ms. Buxom.”

Conviction rates and sentencing suggest that even judges seem to agree with Groper. In a recent criminal case, a beautiful young female teacher, although convicted of multiple counts of the statutory rape of a minor, received no jail time whatsoever. Instead, she was sentenced to perform 200 hours of community service. “Now, we can all have a piece of her candy ass,” Judge Pedro Phile told Unnews reporter Lotta Lies. “Besides, she knows her subject, and she’s a great sex ed educator. Before her last arrest, she received special honors by the student body on Teacher Appreciation Day.”

Not everyone in the judicial system shares Phile’s view that good-looking female teachers’ molestation of their students is acceptable behavior even when it is conducted in an after-school tutorial session for what Buxom calls “sextra credit.”

“The molestation of a child, male or female, by a trusted adult can have devastating effects on his or her self-esteem,” psychiatrist Frank Feeler maintains. “For a long time after it happened to me, I wasn’t sure whether I was coming or going.”

Some judges suggest that molesters should receive equal sentences, regardless of sex or physical appearance. “Male or female, gorgeous or plug-ugly, straight or gay, I let them all walk,” Judge Knott, of Pussy Willow, TX, told Unnews. “Just last week, I sentenced two men and thirteen women grade school teachers to Ms. Buxom’s sex education class. She ought to be able to 'teach' them plenty.”