UnNews:Sarah Palin uncovers the latest conspiracy: Environmentalists are after our oil and our jobs 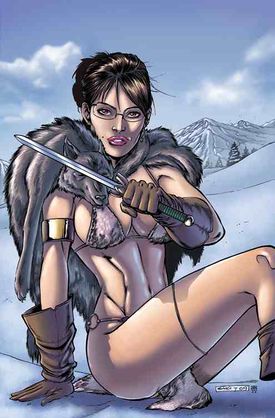 Our Alaskan goddess of hunt comes to the rescue!


ALASKA, USA — Sarah Palin has uncovered the existence of a green conspiracy which is distinctly stained black. The environmentalist conspirators have orchestrated the Gulf of Mexico oil spill in hopes of making fossil fuels unpopular.

The reason why they resort to such drastic measures is obvious: Were the public image of the fossil fuel industry to be severely damaged, the cap-and-trade bill would easily pass into law. This will lead to the creation of a supranational regulatory body, a de facto world government.

Palin publicized this conspiracy on her Twitter and Facebook pages, which are of course checked on a minute to minute basis by a large portion of the world population. She notably stated "Extreme Greenies still don't get it" and "They're not preventing environmental hazards, they're causing them!"

Rush Limbaugh notes "The timing is the unmistakable proof. Remember the carbon tax bill that was scheduled to be announced on Earth Day? It was postponed and then immigration moved in front of it. And then, BOOM, a drilling rig explodes. That's no coincidence."

President Barack Hussein Obama planned to take advantage of the bad publicity for the petroleum industry by banning all oil drilling activities. By doing this, he wanted to make the American people completely forget about the existence of oil reservoirs within American territory, as well as potential jobs related to the extraction of oil of such reservoirs. Luckily, a brilliant federal judge observed numerous flaws in Obama's reasoning and issued an injunction, in which he used the word "fail" to describe Obama's decision. Obama is currently weeping in the White House over his utter failure.