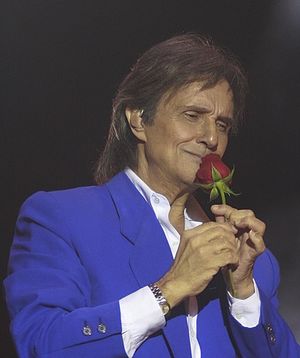 For quite a while, actually, awkward things have been happening in the days before his birthday.


Rio de Janeiro, Brazil -- Today, 19 April 2012, Roberto Carlos Braga is 71. Although it would be awfully difficult to comprehend why this would interest you, since you are so busy trying to find new horseshoes on the internet for your stallion, it is worth mentioning that awkward things have been going on on Braga's birthday:

Sources close to the singer said that he forgot his own birthday, but luckily, some of the Elderly Fangirls reminded him. Strangely, some of these fangirls are even older than he is, and probably were fangirling while he was in Lady Laura's womb.

We couldn't save the cheetah, but we can still save the whales![edit]

It is tempting to laugh to one's heart's content, since the boat in the video is called Lady Laura. What is it with men in boats so that the floating devices are always named after their moms? Do they really love their mothers that much, or is it just something stupid they do? Or are they just struggling to find a name and the only one that comes to their mind is the person that warned them about boats being dangerous?