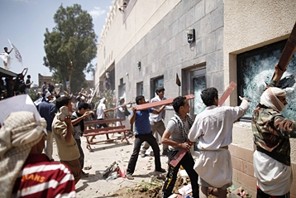 A group of youths seek entry to a movie-house in Sana'a, Yemen, just in case the hurtful movie, or any other, is playing.

WASHINGTON, D.C. -- Street riots spread throughout Arabia as a spontaneous response to an American movie critical of the Prophet Mohammed, taking the life of the American ambassador and three others.

Secretary of State Hillary Clinton used the terms “disgusting and reprehensible” to refer to the movie, though she added that murders are always unfortunate too. She lamented “the continuing efforts by misguided individuals to hurt the religious feelings of Muslims,” in a statement she issued one day before the spontaneous violence began. Mrs. Clinton cautioned Arabs that the United States has pesky Constitutional restrictions on reprisals against filmmakers, although Attorney General Eric Holder was reportedly studying a way around these rules; a Presidential waiver, perhaps.

A way to prosecute hurtful movie-makers might also be used against Todd Akin, a Senate candidate from Missouri whose explanation of reproductive biology could have been hurtful to victims of rape, and against fellow film producer Dinesh D'Souza, whose recent documentary, Obama Shrugged, Part 2016, has been hurtful to a majority of the Democratic National Committee.

Mrs. Clinton further explained, “If it weren't for Hollywood, you'd have a war-mongering Republican President, and you wouldn't like that, now, would you?”

A trailer of the film spawning the riots, Mohammed And Me, has gone viral on YouTube, though few have seen the movie itself, and none of the actors have seen a paycheck. In the trailer, Mohammed (pbuh) is referred to as a fool, a fake, and a child molester. At least one of these assertions is a blatant lie, as there were no laws against humping twelve-year-old girls, back in the Middle Ages.

A group of peasants gathered in Benghazi at the consulate. They stormed it and, when the Ambassador moved to a top-secret, prearranged “safe house,” the spontaneous crowd got wind of it immediately and fired mortars, which Libyan peasants carry at all times. Some Libyans tried to help the Ambassador, slinging him over their shoulder and allowed his head to drag on the ground. “We plan to send more social workers to Libya to train the people in proper first-aid techniques,” Mrs. Clinton added. 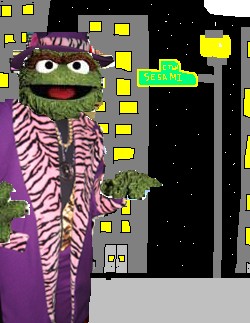 The President was not unwilling to meet with Benyamin Netanyahu during his scheduled trip to the USA; he merely had a prior appointment with an influential Floridian named Pimp with a Limp.

Protesters carried signs professionally lettered in perfect English, as is often the case when Arabian youths express their heartfelt feelings.

Republican candidate Mitt Romney criticized the lack of security in “Ben-Gay, or Benghazi, or wherever they said it was”; and President Obama retorted that Mr. Romney “seems to shoot first and aim later.” Mr. Obama himself avoided rash statements, not even expressing an opinion on whether Egypt is an ally or an enemy. This shrewd non-commitment puts Egypt on an exactly equal footing with Israel, which has lately been wondering the same thing.

The Department of State has been discussing tightening security in the wake of the street protests. Additional measures might include using U.S. Marines instead of unemployed local youths, giving them actual bullets to put in their weapons, not trusting the local warlords to help you hide your guys during riots, and perhaps having ambassadors stay in embassies in capital cities rather than in cardboard shacks in secondary cities in the middle of war zones.

The President has not been to a National Security briefing in two years, but spokesman Jay Carney was quick to note that Mr. Obama is such a “quick study” that he never has to actually attend classes. Shortly after the ambassador was killed, however, he quickly moved to the situation room, a converted banquet hall at the Bellagio Casino in Las Vegas, where a number of high rollers were waiting to discuss with him America's next move. Surely his audience will counsel his signature course in such crises: “Double down.”