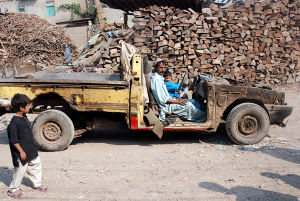 The people of Pakistan are masters of improvisation. This prototype has not only several hundred thousand miles on the clock but also half a dozen test blasts.

ISLAMABAD -- A stunning new invention might redefine the economics of terrorism: Smart engineers from Pakistan are constructing a car bomb that can be recycled after use if no one steals it first.

"For too long we have been making do with what we got from the auto producers" says Rashid Dulahar, a spokesman of Replosives, Inc., an Islamabad startup company specializing in reusable war and terror components. "The standard products of the car industry simply do not meet the needs of certain emerging markets. Today's cars are too strongly focused on the aspects of transportation, comfort, and status. Other, more practical aspects have been neglected. Our modifications are filling this gap." Modifications have been made to many average cars found in Pakistan already. Several Datsuns and Hondas now have self-contained, refillable shrapnel compartments.

For the average consumer in a Middle East country, a car is a very expensive object, in many cases a purchase of a lifetime, the main reason why most people there still drive 1980's Soviet and Japanese cars. Up to now, it was not easy to part with, even for a noble cause like blowing a Danish embassy to smithereens. This decision has been made much easier now that the proud owner can hope to retrieve his vehicle, put it back to everyday use and maybe even one day use it for another attack.

Of course, the inventive entrepreneurs are already planning a bunch of other innovative products. "We are not restricting ourselves to the local markets. In the face of the credit crisis, even the industrial countries have to cope with budget cuts for their military. Not long from now we will be able to offer reusable nuclear warheads, land mines and cluster bombs. Our products do not only save money, they also reduce the consumption of valuable natural resources. We are bringing sustainability to the defense industry." The speaker admitted that the carbon dioxide footprint of his car bombs still leaves a lot to be desired, but confirmed that the developers are working on that aspect as well.

This article features first-hand journalism by an UnNews correspondent.
Retrieved from "http://en.uncyclopedia.co/w/index.php?title=UnNews:Reusable_car_bomb_invented_in_Pakistan&oldid=3802216"
Categories: