UnNews:Rapture! Rev. Jerry Falwell taken to heaven, everyone else left behind 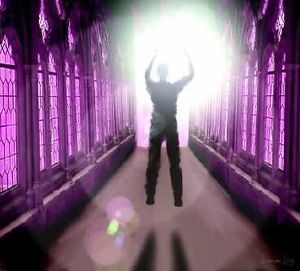 Rev. Jerry Falwell's soul ascending into heaven during the rapture.

LYNCHBURG, Virginia -- Long-anticipated by Christians, the Rapture occurred at approximately 11 a.m. Eastern Time this morning. In accordance with evangelical doctrine, all true believers were taken up to heaven, while those who erred in their faith remained on Earth to suffer the tribulations that are to come. Although authorities are still searching the planet for other missing persons, it is all but certain that the Reverend Jerry Falwell was the only true follower of Christ. Believe that and you will beleive anything

The news dismayed many other fundamentalist Christians idiots , including notable leaders like Pat Robertson, who were convinced that they, too, would be taken up. "I guess I must have sinned somehow," a repentant Robertson admitted. Believers still have a chance to return to the righteous path in the years to come, as people will battle the forces of the Anti-Christ. Those who are martyred for the faith will get another chance to ascend to heaven.

The morning event has dispelled all doubts and skepticism about the reality of the Rapture. Even noted atheist Richard Dawkins claims to have been "born-again" and recanted his previous anti-religion statements, "I was a fool not to have believed in God the Father, his Son Jesus Christ our Lord, and the Holy Spirit." Pope Benedict XVI immediately resigned his position, returned to using the name Joseph Ratzinger, and announced that Roman Catholicism was "clearly a sham religion."

The Rapture was first discovered by Ron Godwin, executive vice president of Falwell's fundamentalist Liberty University. "I had breakfast with Jerry," he recounts, "and then, suddenly he was dead. But then I quickly realized he didn't just die - his soul was raptured up into heaven." Doctors say the Reverend's vigorous health completely eliminated the possibility of death by anything other than supernatural rapture, which was listed as the cause on the official death certificate.

Close associates of Falwell say people should carefully study his teaching and quickly change their lifestyles for one last chance at salvation. A key moral point is to hate all lesbians, gays, feminists, and liberals, as according to Falwell they have contributed to God's wrath against American and caused the 9/11 terrorist attacks. Children must also and immediately stop watching the BBC sitcom Teletubbies due to Tinky-Winky, a character who has become a homosexual icon.

With the Rapture behind us, the world is now bracing for the coming of the Anti-Christ and the grueling battle of good versus evil before the return of Christ. Sales of the Bible, whose book of Revelation gives important clues to upcoming events, have skyrocketed. The "Left Behind" series of books is also in high demand, while all copies of "Harry Potter" have already been burned, along with effigies of J.K. Rowling at the stake.

Yet there still is a glimmer of hope for those believers who have repented. Pope Benedict, along with his most trusted cardinals, recently checked the Bible and declared that, unbeknownst to us all, there was a little known 28th book to the New Testament, which said that there will be a Third Coming, upon which everyone else who was a loyal Christian would be brought up to heaven. In a speech to Vatican City, the Pope read aloud an excerpt from the newly found book, dubbed the "Extra-New Testament:" "And Lo! For whense all of Earth shall dispair, for the Rapture hath taken those loyal, fear not! For a Third Coming of Him the Lord shall occur, and those who hath repenteth all sins (Including, by the way, Pope Benedict XVI, and cardinals Wailin, Haroldo, and Genrich) shall occurreth, and believers shall be saveth!"

Christians everywhere are immensely relieved to hear this, and anxiously await the Third Coming, as avidly as they had awaited the Second coming.