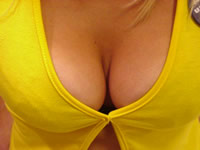 It is hard to believe that all the world's rifts, trenches, clefts, and divides are unrelated.

This bombshell was dropped by Iranian cleric Hojatoleslam Kazem Sedighi one week ago. "Many women who do not dress modestly...lead young men astray, corrupt their chastity and spread adultery in society, which [causes] earthquakes," Sedighi had said. He was quoted in the Iranian media, generally considered infallible in matters of natural events and their causes.

Reporters from CNN and the BBC have caught onto the craze, though no one in the broadcast media ever tries to parlay physical attraction into personal advantage.

On the off chance that global upheavals actually subside during the 24-hour test period, the experiment may usher in a wonderful new era of sluttiness. Meanwhile, the co-ed, majoring in both genetics and evolution, insists that, "when this is done I hope to be known for the actual science that I do." However, Lafayette's seven Gentlemen's Lounges will provide a fine fallback career.