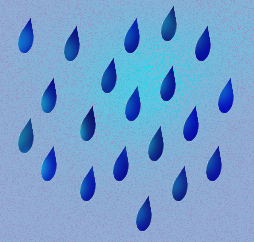 The reported precipitation as it appeared on the North Korean television.

Pyongyang, North Korea -- The much publicized precipitation shown on North Korean state television around noon proved to be nothing more than diced onions flushed down from toilets of an Air Koryo flight. This highlights the fact that airplanes in North Korea flush waste directly out rather than store it in septic tanks. The source of the diced onions was found to be passengers puking in the toilet owing to motion sickness and that onions were served for lunch that day.

There have been many such reports of diced onions falling on unsuspecting citizens on the ground below. "I was just going to have my sandwich when a few diced pieces of onion fell from the sky, right onto my sandwich. Thank God, it wasn't something else", an unknown Korean guy was quoted as saying. However, everyone claimed that it was a welcome change instead of the usual precipitation.

This event however has left the North Korean meteorological department shame-faced, as their claim that this was a legitimate weather phenomenon was falsified. "We suspected it to be rain or hail or both, but, looks like fortune eludes us once more, for the 200,000th time", said a teary eyed Director of the Meteorological department a few minutes before he committed suicide by getting into a bar fight in a gay bar where he was raped and killed by a bunch of gay bikers.

North Korean airlines are known to induce motion sickness for as long as anyone can remember, second only to Mexican airlines. When asked about the questionable waste disposal system in their planes, the North Korean Minister of Aviation countered,"If you are walking in a park and feel the need to take a dump, do you take a dump, collect your crap, put it in your pocket and take it home with you to flush? We believe the same must apply to our planes".

After this international fiasco, North Korean airlines have been banned from flying into most countries of the world, with exception to the likes of Mexico and the whole of Africa.