Chicago, ILLINOIS There has been considerable backlash against a Barack Obama speech in which he claimed some Pennsylvania residents are "bitter," clinging to guns or religion or antipathy towards people who are not like them. "I am absolutely outraged," said Greendale, PA resident Peter Mitchell. 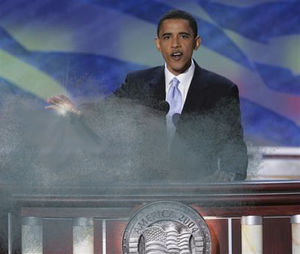 Shortly after his remarks, bitter people burned down the building.

"I do not like what Mr. Obama said, and will probably hold a grudge against him for saying it for some time."

Obama has already repeatedly apologized for the remarks. "What I said could be considered offensive... and I misspoke," Obama said. "His comments were indeed offensive," said Mark Scheiffer, another PA resident. "I had already disliked Obama, because he does not look like me, but I certainly will not be voting for him now."

An Instapoll conducted by the Pew Research Center showed that 54% of people disapprove of Obama's remarks, and 32% would, if given the chance, shoot him with their gun. Pundits are forecasting a fall in support for Obama. "Categorizing these bitter, antipathetic people as bitter and antipathetic is like shooting yourself in the foot," said George Hinkley, a member of the Washington DC based Hershler Think Tank.

Obama's rivals have taken advantage of the verbal slip-up and have attacked Obama as an 'elitist.' "These wonderful, bitter people are not materially poor, but spiritually rich," said Hillary Clinton. "I hope he enjoys the view in his ivory tower." The Republicans, too, have categorized Obama as elitist. "Mr. Obama has sullied the good name of thousands of hard-working, bitter people," said John McCain, shortly before dozing off.

Analysts say Obama can recover from this, but it may be that only time can heal these wounds. "He has dug himself into his own hole," said Hinkley. "He better hope he doesn't speak the truth again."