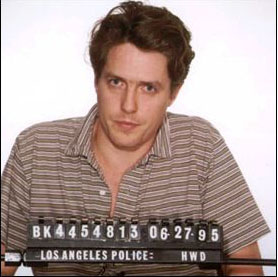 A promotional shot for the film.

HOME COUNTIES, England -- Protesters today marched on the Broadcasting Standards Commission in protest at the release of the new Hugh Grant film which premiered this weekend. The film, Plank, is a gritty action thriller which follows the day of mild-mannered librarian Alistair Plank, who is injected with a serum which will kill him if he does not keep his heart rate above 90bpm. Plank is forced to engineer a number of situations to stimulate him and keep his pulse artificially high.

The film begins innocuously enough, with scenes of Plank at CafeNero drinking several espressos, but after they begin to wear off the film develops a harder edge...

"It's a disgrace," says West Sussex resident Margaret Trellis. "The film has scenes of total anarchy and degeneracy which younger people should not be allowed to see. What if some of them decided to re-enact any of these terrible things?"

Scenes which the protesters are alarmed about include one of Plank in a cinema. When his viewing is interrupted by teenagers behind him laughing and talking, he turns to them and asks them to be quiet. When the action in the film escalates he does not thank the vendor who sells him a Daily Mail; then he deliberately does not point out that his has been undercharged for his train ticket. Shocking images such as these are quite bad enough, but it is the final scene, during the film's dénoument, which Mrs Trellis is particularly shocked by. "He is buying stamps at the Post Office, and even though he is obviously quite aware of the queuing system, he deliberately pushes in to the front and brazenly cuts into the next open window, before nearly a dozen people."

Her obvious outrage is shared by the thousands of protesters who march with her today to the gates of the BSC. "Really, where will it end?" she asks us. "Disrespecting the monarchy? Cruelty to animals? We must stop this kind of thing now, before society as we know it collapses."