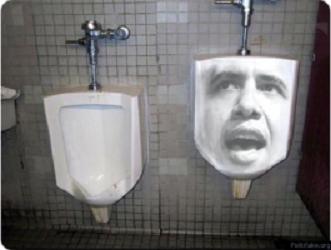 WASHINGTON, DC – Forget about beefing up the ranks of Infernal Revenue Service (IRS) agents to collect “taxes” upon citizens who can't afford expensive Obamacare health coverage; the president has a much more frightening prospect in mind for American citizens—and, this time, even his own staff and Congress won't be excluded, although, as a token of his appreciation to the Supreme Court's Chief Justice John G. Roberts, Jr., who single-handedly upheld Obamacare, the administration may let him “opt out” of the new safeguards.

President Barack Obama said he has “no tolerance for leaks” in the wake of Republican presidential nominee Mitt Romney's accusation that, as a “gay pervert, the president obviously enjoys taking a peek at the leaks coming out of the White House and elsewhere in his administration.”

“If the leaks don't stop,” Obama declared, “I am hiring restroom attendants for every public restroom in the White House and across the fruited plain.” He may also install such federal employees in the bathrooms of private residences.

Obama believes that the leaks are “harmful to the nation's restroom infrastructure” and could be “a source for disseminating diseases.”

The president also asked Unnews to remind its readers to “wash their hands after taking a leak.”

“Everyone must do his or her part,” Obama maintained, “if we are to bring this problem to a close.”

Part of the solution to the problem of leaks, he said, is to “keep private parts private unless they are in use in the privacy of one's own bedroom or the privy.” The First Lady, he said, hasn't seen his privates since he went gay a few months ago, in support of the gay rights agenda and his November campaign for re-election. “Michelle needn't peek,” he quipped, “because I don't leak, and other responsible Americans shouldn't, either.”

If a person suffers from enuresis (bedwetting) or urinary incontinence, he or she should “get a life,” the president advised. “We have to stop these leaks at all costs.”

“All these leaks are contemptible,” Romney said. “No other administration has leaked as much as this one.”

Obama said, “I'm doing all I can do to stop these leaks, but, if they continue, Americans will be doing their business in front of restroom attendants or video cameras with live feeds to the FBI.”

“My message is simple,” the president said. “Stop the leaks—or else!”