UnNews:Obama, McCain to Participate in Deathmatch for Presidency 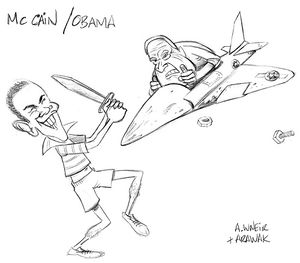 The idea came from some random shcmuck's drawing.

WASHINGTON, D.C. - In presidential elections 2008, the two remaining canidates are Barack Obama and John McCain. Seeing that the odds are tipped unfairingly to Obama's side, poll creators thought they should come up with a new idea that will determine who becomes president. After coming up with this Idea, they submitted it to the U.S. Government.

The poll creators' idea is to have Obama and McCain participate in a full-contact deathmatch. Seeing the potential in the idea, the Government gave it the thumbs up and immediately had all polls removed from America. The match is scheduled to take place November 2, 2008. Both candiates will fight for the life until someone dies.

Obama and McCain have been recently informed. Obama and McCain are now taking training from several kick-boxing champions and also many just regular body trainers to get them in shape. Obama has made arrangements to go to boot camp at Westpoint for two months of training. Both presidents feel as though they are the one to beat.

In the match the canidates will be supplied weapons, tools, vehicles, etc. The match area is split up into four quadrants, each one sqaure acre in size. Weapons and vehicles will dipersed throughout the area. Also, the match will be filmed, so it can be watched by everone around the country.