UnNews:Numbers are not infinite - last one found 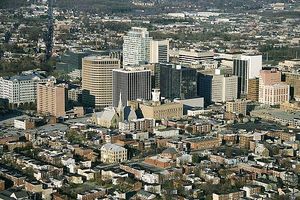 University of California, Los Angeles - The Colosseum of mathematics has been hit square-on by the scud missile of computer-processing, leaving the discovery that the number of integers in our universe is in fact finite.

George Woltman, founder of GIMPS, at first thought some kind of software malfunction had occurred. But after studying the final number he realised that - indeed - there could be no number larger than that written as a string of 15978189 nines.

Woltman told us, "A friend of mine physically punched me shouting that this was ridiculous - that the way integers worked you could move onto the next one by taking a '1' and following it with 15978189 zeros. We tried it there and then, and he was forced to concede that such a number did not exist."

Most in the mathematics community have always believed there to be an infinite amount of numbers - that essentially the search for prime numbers would be a never-ending task. In 1997 however, a few did start to speculate whether this was indeed the case. Carol Vorderman was one such infinity skeptic; she told us, "Some in our community were given a real jolt by the death of the Princess of Hearts herself, Diana. We thought that if the life of such a flawless flower could be extinguished then so could numeracy." Most who subscribed to this theory quickly abandoned it when they realised that though her mortal life was ended, Diana's perfect love for all of us would last forever.

Though incredible shock has reverberated around the scientific community like green shock-jelly, some saw the end of the number story as a tremendous relief. People spoke about how they could move on to something new, have faces clear of facial hair and even venture 'outside'.

'Counters' around the world are excited by the news, knowing that their hobby of saying every number in turn out loud starting from 0, now has an ultimate goal. John Rackspank, 42, from Chelsea, London, one of the few who have been able to make counting into a full time profession, has been counting for twenty years and has reached 1,112,034,322. He commented, "We've always been objects of ridicule. People saying that it was a never-ending vocation with no ultimate conclusion. I think a few of them will be eating their hats tonight; my life pursuit now has an ultimate goal - there is a light at the end of my number tunnel."