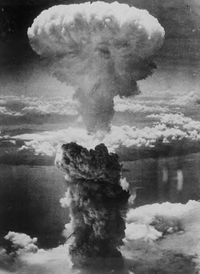 Oak Ridge: a little knowledge can be a dangerous thing

OAK RIDGE, Tennesee - The U. S. federal government, in a surprising show of generosity, has provided open access to once top-secret information concerning the process for enriching uranium, a critical step in the production of nuclear weapons. Anyone who works for the government’s Oak Ridge, Tennessee nuclear laboratory, in any capacity, is authorized access to the sensitive data, and Roy Lynn Oakley, 67, a janitor, helped himself to classified data that he hoped to sell to Iran.

The Middle Eastern country is in the process of developing nuclear weapons with which to annihilate Israel and the United States and has expressed interest in making the United Kingdom, Great Britain, and England eventual targets as well in its war against the “great Satan.” According to Oakley, Iranian scientists were “counting on the information I was going to provide to them” as part of their ongoing effort to enrich uranium.

"Actually, I thought they might have been French. The men I met with were very nasty and insulting, they were completely ungrateful, they hated Americans, one was eating something that smelled liked rancid cheese, and they smelled. Really P. U. One looked just like John Kerry. I mean c'mon, anyone would'a thought they were frogs!"

“They wanted the bomb,” he told Unnews’ reporter Lotta Lies, “and I was planning to let them have it.”

Some Americans, upon learning of the alleged offer by Oakley to betray his countrymen and endanger the lives of millions, were troubled by the U. S. government’s handling of data that could have a devastating impact upon national security. “Rank and file reporter's are a really p. o.'d about this," said Punch Sulzberger publisher of the New York Times. "We don't like the idea of amateurs inserting themselves into the dissemination of classified information. That's our job!" Punch angrily said.

While acknowledging the constitutional role of the media to "let or enemies know what we are doing," presidential press secretary Tony Snow said "“You guys don’t understand how incompetent and corrupt bureaucrats and politicians are. There’s a good reason that they’re public servants instead of men and women who actually work for a living.”

Oakley is a janitor for Nuke-B-Kleen, a company that contracts with federal nuclear waste depositories to sweep and mop up radioactive fuel leaks and nuclear waste around the nation. As such, he is qualified to access information about nuclear weapons any time he likes, for whatever reason he wishes, including the sale of such data to hostile foreign governments, from press releases to various media outlets. “How do you think the North Koreans learned to enrich uranium? They read the New York Times or simply watched Kate Couric-- or made a phone call to Bill Clinton or his pals in the Loral Corp.” Oakley noted as he graciously shared credit for the Asians’ initiation into the world’s “nuclear club.”

The site at which Oakley works was closed in 1987, and he was working on an ongoing, long-term (some critics contend, never-ending) project to clean up the nuclear wastes left over from the Cold War era. The site was instrumental in producing “Little Boy,” the atomic bomb that Harry S Truman ordered to be dropped on Hiroshima, Japan, toward the end of World War II. “I thought, ‘Why work for minimum wage, cleaning up nuclear waste, when I could sell the secrets of uranium enrichment to the A-rab towel-heads for ten times what I make per hour, or approximately $75? This is America where everything is for sale!”

The Department of Energy has proposed that “some level of security clearance” be imposed upon the janitorial staff to prevent future “leaks” of such information. “It's probably a good idea that those who have taken an oath to destroy the U. S. should have only limited access to weapons that could destroy us,” spokesman Moe Ronn said. "I hope no one minds," he added apologetically.

Congress may take up the issue in early 2008, following its annual end-of-the-year recess in December and January. However, both Democrat leaders Nancy Pelosi, Speaker of the House, and Harry Reid, leader of the Senate, expressed reservations about a congressional investigation. "We want to spend our time on something important--something that will help us retain power. The Republicans are the real threat!"

Reid, Pelosi and assembled members of the media agreed.

Meanwhile, special "strong duct tape" is on order and will be used to hold drawers closed on some file cabinets at the nuclear lab in Oak Ridge to thwart “indiscriminate” use of selected data. “A library card is needed now to access some of the information,” Ronn reassured the public, "or a subscription to The New York Times."