Someone did a poor job wiping their crack.

ATLANTA, Texas -- It was just another inconspicuous day when Karen Ronda walked into the Dollar Tree. As soon as Karen stepped through those automatic doors, she wrinkled her nose amidst something most foul. "Ugh," Karen said, disgusted. "What in God's name is that smell?" She looked down and saw to her horror some dark brown substance smeared several places across on the floor near the check-out. Normally, one would give the benefit of the doubt and assume that maybe it was chocolate. Except chocolate doesn't have a stank like this did. There was no doubt about it: Karen was looking directly at human feces smeared on the floor of the Dollar Tree.

Karen complained to the cashier, but he did nothing about it but give her attitude. Thus, Karen went home, took to Facebook and shared her awful experience with the world. Within days, the Dollar Tree became a media fenzy throughout the tri-state area. Paparazzi swarmed the store. Customers flooded in to get their picture taken with the shit, only to be disappointed that it had already been mopped up. Everyone and their cat needed to know: Who shat the dollar store?

It became a story of such attention and importance that the Texas Rangers were called in to investigate. The prime suspect in the case was first thought to be a man named Mike Saksexellent. Given that Mike has a criminal history in smuggling fried chicken from the nearby WalMart, as well as a history of other toilet-based mishaps, he had already earned a reputation in the community as a scoundrel and criminal mastermind. Mike had worked part time as a stock boy the previous year during the week leading up to the grand opening. He, unfortunately, didn't make the cut for hiring. It was presumed that Mike's motive for smearing shit was an act of petty revenge. Law enforcement broke down Mike's door and arrested him as he was sitting naked at his computer vandalizing Uncyclopedia. Mike was taken into custody for questions, and when he wouldn't confess, he was forced to spend a night in jail.

However, all charges against Mike were cleared the next day when the crime lab did a DNA test on the shit smear. As it turned out, in a surprise twist no one saw coming, the shit belonged to former Vice President Joe Biden.

Security footage had shown that Biden had indeed dropped by the store the day of the incident. Apparently, taking a break from the campaign trail, Biden had stopped by the small Texas town after hearing a rumor that they had the "best damn Corn Nuts in the entire country." Joe Biden managed to slip through without being recognized due to wearing his face mask. Having picked up his pack of Corn Nuts, the former Vice President dropped by the restroom to drop the kids off at the Lincoln Memorial Reflecting Pool. And the rest is literally history.

How he managed to smear the crap on the floor on the way to the check-out is still a matter of speculation. There are two leading hypotheses. The first is that Biden squats when he uses a public toilet, and a turd must've fallen onto the floor, soon to be stepped. The other is that he didn't wipe well enough, some turds fall out of his ass, rolled down his pant leg and onto the floor as he was walked up to the check-out. However it happened, there can be no scientific doubt that the shit smears came from Joe Biden.

As soon as the story broke national news, the Donald Trump campaign wasted no moment to pounce on it. Trump highlighting it an example of Biden's senility and ass-wiping incompetency, calling him nicknames like "Poopy Joe" and "Down Town Joe Brown". The Biden campaign at first denied that the poop came from Joe, calling the accusations a smear. The Trump campaigned retorted "You're one to talk about smears!", to which the Biden campaign, having no witty comeback, simply responded, "Fair enough." When the media pressure built and he could no longer deny it, Biden sent personal letters of apology to the Dollar Tree, Karen and Mike, saying, quote, "Sorry 'bout that, Jack." 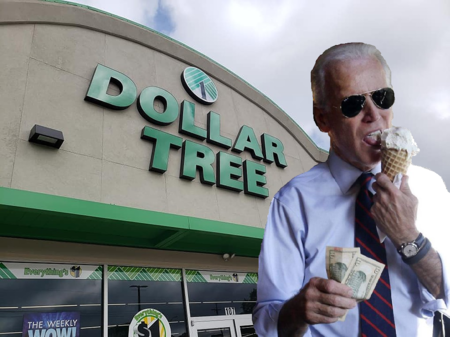 Following the incident, Joe Biden would go on to become a welcomed regular customer at the Dollar Tree, praising their fine selection of ice cream and sunglasses. He would always leave more shit smears on his way out, attracting mass tourism to the humble store. They boom when he boom-booms.