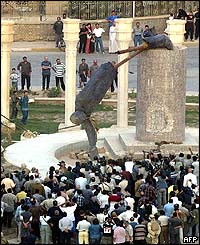 Basra, Iraq -- Iraqi activists say that pro-government forces loyal to Saddam Hussein's regime have killed 45 people in the southern city of Basra, including children. Iraq, one of the countries involved in the regional Arab Spring, has become a particularly volatile region after calls for President Saddam Hussein to step down were violently repressed. Hussein, who has been in power officially since 1979, has been accused of a long list of human rights violations. Hussein has been accused of gassing his own people with chemical weapons he received from the Reagan administration, waging war on Iran and Kuwait, and committing genocide against Shiite Muslims and Kurds. Most of these violations occurred in the 70s, 80s, and early 90s. Saddam's ability to wage war and brutalize his own people was reduced by crushing sanctions under the Clinton and Gore administrations of the late 90s and 2000s.

Experts in Middle East studies suspect that the Iraqi regime should fall sometime this year, similar to Tunisia, Egypt, and Libya. President Barack Obama, after consultation with NATO and other Middle East leaders is pressuring Congress and the Senate for limited military engagement in Iraq, similar to Libya last year. Most Democrats support the President but he his meeting pretty fierce resistance from Republicans in the House. Senator Rick Santorum told UnNews that "With this latest military escapade, President Obama is showing us more of his true colours, that he wants to use the mighty American military to conquer the world. I think the last thing the Iraqi people, or anyone in the Middle East for that matter, want is American tanks rolling through their neighbourhood. We would only be seen as imperialists, this is a bad idea and the President should not go ahead with it".

Presidential candidate Newt Gingrich told UnNews that invading Iraq would have no benefit for the United States. "Yes, Iraq has vast oil reserves, but with the socialist leanings of the Iraqi people our oil companies would not have much room to make a profit. The Iraqis wouldn't allow it. While I disagree with Senator Santorum's negative view of American military force, I do agree with him that an Iraqi invasion is a bad idea. Why do you think Bush got out of Iraq in '91, its a money pit and he knew it. If Obama knows whats good for him he'll stay the hell out of Iraq".

Obama countered Gingrich's and Santorum's comments immediately, calling them bullshit on live television. "First of all, let me say that the United States has no imperial intentions when it comes to Iraq, Syria, or any other Middle Eastern states. Are we stationing soldiers over in Libya right now? No, well I rest my case. Besides doesn't everyone remember George W. Bush's campaign in 2000 when he ran on a promise to invade Iraq and then divide the proceeds of the Iraqi oil into 300 million payments for the American people. Thank God he lost, imagine what kind of a state this country would have been in if he won". Obama later pointed out that his predecessor Al Gore intervened in both the Sudan and Zimbabwe in the 2000s and no American troops even set foot on the ground, let alone were stationed over there. "This is just fear mongering by the right wing, we only want to intervene to spare more lives, the Iraqis owe us nothing, we aren't into nation building".

The American government's plan to intervene in Iraq has a 64% approval rating from the American people. Critics counter that over 30% oppose and that part of the reason that approval is so high for intervention is because of the high popularity of both Obama and the Democrats in general. The United States has not seen a Republican President in over 20 years. Under the Clinton, Gore, and now Obama administrations, economic conditions in the United States have vastly improved. Health care was nationalized last year when Obama passed his overhaul healthcare legislation, much to the chagrin of the insurance industry, wages have grown under 20 years of Democratic rule, and strict regulation of the housing industry have also allowed more Americans to stay in their homes during the mortgage crisis in the late 2000s. Because of this, Obama enjoys huge popularity and has the ability to pass legislation and act in ways that less popular Presidents may not be able to.

While Obama has not said for certain whether or not he will launch an air assault on Saddam Hussein's military, sources close to the President indicated that he will but did not specify a time or place. He recently emerged from a meeting with Canadian Prime Minister Jack Layton and British Prime Minister Gordon Brown at the White House in what critics interpret as an attempt to drum up support for the intervention. Another source close to the President indicated that Obama may attempt to send special forces into Iraq to "neutralize" Hussein. This would be similar to the force that killed terrorist Osama bin Laden in Afghanistan in August of 2001 after then-President Gore received a credible threat that al-Qaeda was planning on attacking the US on its own soil later that summer.

Meanwhile in Iraq, millions of protesters are taking to the streets in almost every Iraqi town and city. Despite the threats of mass slaughter and torture in Saddam's dungeons, Iraqis are standing up and demanding their freedoms. In Saddam Hussein's hometown of Tikrit, statues of the Tyrant were toppled and effigies of him burned. It appears that whatever the US and its allies decide to do, time may finally be running out for the almost 75-year old despot.