UnNews:Hilton IS Messiah after all! 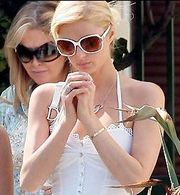 Well, that proves it then.

PROSPECTS OF A PRISON TERM diminished for Paris Hilton as a photo of her praying was circulated around the world last night. The picture was given as irrevocable proof that she is the embodiment of the second coming of Our Lord. 1000s of worshippers gathered as the news spread that the blonde socialite was revealed as the personification of God Himself.

"I just knew it from looking at her slightly odd eyes" one of the worshippers said, "I hope all these media snobs just, like, leave her alone now else she'll, like, totally diss them!"

The image, of Paris holding her in hands in prayer as she leaves a Beverly Hills crack house, was greeted by the Catholic, Jewish and Jedi churches as final proof of her divinity.

The news means that the prospect of her serving a prison term has reduced dramatically. However, Hilton isn't out of the woods yet as Jewish scholars have already begun legal proceedings to have her crucified.

Former born again Christian Bobby Flummox described the moment he heard the news, "I quite literally crashed my car deliberately into an old lady, killing her instantly. I'd rather go to hell that worship that air headed trollop!"

In a statement Head of the Catholic Church Pope Himmler IX said, "she's not Jew is she?"