UnNews:High court orders woman to "get a sense of humor" 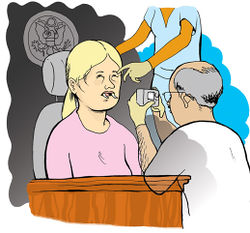 An artist's rendition of Ms. Dunhurst, looking decrepit and morose, as usual, being photographed by a ghost.

OLYMPIA, Washington, USA -- Dental hygienist Larry Bendavid has long been known for his zany office antics. His cans of silly string, water-squirting flowers and inappropriate touches at the company picnic have all become staples of his relaxed, sociable working environment. "I like to make the patients feel as if we're friends, so I play little jokes here and there" says Dr. Bendavid. "So you wake up from a cavity filling with a ball sack drawn on your face with a magic marker. So what! Isn't that what friends do?!" Dr. Bendavid pauses to adjust his oversized clown shoes.

Unfortunately for the good doctor, not everyone in Olympia agrees with his Patch Adams-style of dental care. Actually, that statement is false: everyone in Olympia agrees with Dr. Bendavid's Patch Adams-style of dental care except for one remarkably drab Washington woman named Elsie Dunhurst. Ms. Dunhurst, an assistant to Dr. Bendavid, did not take kindly to his typical chili-powder chewing gum. Or his regular practice of throwing firecrackers into the woman's restroom while the one-toilet bathroom was occupied. But the real straw that broke Ms. Dunhurst's camel-like back occurred in April of this year, when Dr. Bendavid surgically replaced her teeth with the tusks of a walrus. Lisping her words terribly, Ms. Dunhurst filed suit.

However, the arduously long trial came to a closing today as the state's high court handed down a landmark decision in Dr. Bendavid's favor. Judge Harry Sloane read his prevailing opinion aloud to Ms. Dunhurst (who had since removed her walrus tusks):

Upon the ruling's announcement, Dr. Bendavid made one final statement to the court. "I'm extremely pleased with this ruling, and thank the court for their understanding in this matter. Seriously, if I'd known what a frigid bitch she was I really wouldn't have hired her. I invite everyone on the panel to my office for free dental exams and some delicious homemade chocolate mousse. Don't worry, it wont explode."

Dr. Bendavid's chocolate mousse party is scheduled for next Thursday.