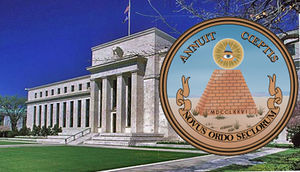 WASHINGTON D.C. -- In a move that initially terrified UnNews, the Illuminati front organization known as the FED, which falsely poses as an American Government Organization, filed a law suit against both Uncyclopedia, the Opedia, as well as MrN Mattsnow, the Dude, for effectively exposing their sinister plans.

According to court documents released to the Press, the Grand Master of the FED, Sir Alfred E. Neuman, has taken offence to the incriminating evidence made available to the public by Uncyclopedia.

According to evidence given on Uncyclopedia, the FED's master plan is to create the North American Union, and join North and South America thus creating an All American Union (AAU). Then the AAU will join with the European Union and the Asian Union, who will then divide the World into 4 economic zones, viz., rich, poor, poorer, and poorest, and finally join all together for total one-world-government or the New World Order.

In defence of their hidden agenda, FED and NWO spokesperson, Bono, was adamant about the need for the New World Order. Bono told UnNews, “If the Earth is one country then food produced by the Planet can be evenly distributed in Africa where all those niggers are starving their asses off! I won't even hug Barak Obama until those savages get fed! Otherwise they'll carry on eating each other and none will be left!”

Uncyclopedia, who are clearly a more powerful organization than the FED, in that they’re not suing the FED, its vise versa, is standing firm. According to Mattsnow, “Fuck ‘em if they can’t take a joke! We’re protected under parody, so we’re not paying any attention to this case. In fact I just used the court summons to wipe my ass. After all, we ARE Uncyclopedia!!”

Mattsnow continued, “Throughout the ages they Mr. T has been busy behind-the-scenes making World Wars, Depressions, Pandemics, Earthquakes, Money, Apocalypses, Movies, and stuff. They are the kind of people who would fund Hitler just because they thought he had an amusing moustache. So our answer is ‘bugger off!’”

UnNews will most certainly keep you informed, as we are NOT at all scared to death of these goons. Not in the least. After all, we're protected by Parody, and he can even kick Jack Bauer's arse. That is until they finally convince you that web censorship is a good idea. Then we really are all fucked.