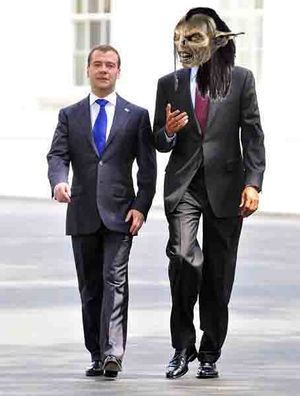 An example of the technology used by Russia to disguise their spy. Tricksters!

WASHINGTON DC -- The Federal Bureau of Investigation have issued a number of photos of a man they have identified as a secret Russian agent associated with the recent mass arrest of 10 spies in the USA last weekend.

Describing the individual 'the 11th man' and that he is a tall, skinny man with a short cropped hairstyle, the FBI believes he has gone deep undercover and are asking for the Great American Public to look out this dangerous individual. Code named KenCom ( 'The Kenyan' Communist'), by the law enforcement agency, the FBI believe he is the ringleader in charge of the spy network which has been in place in the USA since the 1960s. 'KenCom' was recently photographed walking with his Russian handler, the so called Russian President Dmitry Medvedev and sharing a car with him. However, thanks to devious Russian inspired software, the FBI's computers have crashed every time they have tried to unscramble the images.

The spies plan was to influence American domestic and international policy in such a way that introducing subversive laws like health care reform, going soft on France and allowing China to grow to its current economic and political dominance. Also the FBI say the recent signing of a treaty with Russia to reduce nuclear weapons stockpiles all point to one of the biggest conspiracies to subvert the country since the days of the heroic Senator Joseph McCarthy in the 1940s-1950s. The FBI have also unofficially thanked the Israeli agency Mossad for their assistance in breaking this spy ring and pin pointing all those they thought were enemies of both the USA and Israel.

We have been watching this particular individual KenCom since 1961, said a spokesman for the FBI. His parents who were both agents of support for Communism so it made sense to have a son who would be a 'clean skin baby' without known political affiliations. But we had this boy followed for nearly 50 years to see how far he planned to overthrow the American Constitution. We are hoping it will be a matter of days before we can apprehend this cunning individual and bring him and his 'Russkies' all to court. We are closing in and we believe the man we want is living somewhere near Capitol Hill under an assumed name! 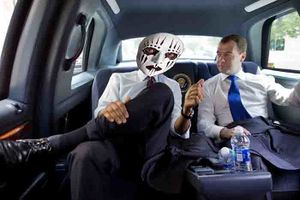 Another example of the technology used by Russia to disguise their spy. Swines!

Meantime many 'friends' of this persuasive stranger have been detained by the Homeland Security Department. They include Nancy Pelosi, Oprah Winfrey, Will Smith and John Stewart. Leading Republican Party commentators like Ann Coulter, Sean Hannity and Glen Beck have demanded all those found guilty to be shot. They propose that presidential hopeful Sarah Palin be entrusted with a gun to finish them off - Utah style - in time for the November 2010 mid term elections.

President Barack Obama has authorised a full investigation on Russia's spying activities in the USA. However his wife Michelle Obama says Barack can't meet the media as he in a shed in the White House trying fix the family's wireless internet connection.