UnNews:FACT CHECK: Birthday Card not as Accurate as Hoped 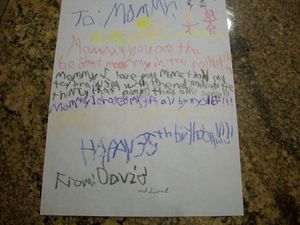 The Note in question. Read UnNews next week when we fact check the Conservative response, written by David's brother and rival Mark Irving (6)

KINGSTON, Pennsylvania-- Is Kingston mom Linda Irving the greatest mother of all time? Does her son David love her more than any other son could? Did David put sincere dedication into the gift she received?

Yes, says David in a recent birthday card widely publicized throughout 407 Butler Street. In that card, David Irving, 8, aims high and claims the above — and more. However, he goes adrift of the facts in a much more jarring and noticeable manner than was expected.

A quick look at some of his statements in the card and how they compare with reality:

IRVING: "Mommy you are the bestest [sic] mommy in the palNet [sic]!!!"

THE FACTS: Irving's claim here is a curious one, considering that there are absolutely no peer-reviewed studies that confirm nor deny this. Moreover, there is very little chance that any impromptu studies that Irving himself conducts would be accurate. According to the recipient of the card, his mother Linda, David has been over to "about ten other boys' houses." Out of the tens of millions of mothers throughout the United States, let alone the world, there is considerable doubt that Linda Irving is truly the greatest mother on Earth. 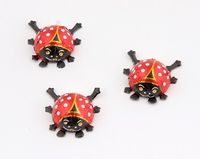 IRVING: "Mommy I love you mure [sic] thaN my toy traiN set with the red traiN aN [sic] the bells aN [sic] the thinjy [sic] that plays that one soNg!!!"

THE FACTS: Actually, Irving's affection for his mother is far from perfect, and certainly not constant. Lionel Irving, husband of Linda and a source familiar to David Irving says that last week he "lost it when he wasn't allowed to stay up to watch a rerun of Chalkzone. He screamed at Linda, saying he 'hated her guts' or something like that...he was later sent to his room." It wasn't but a day later that David Irving, according to workers at Gertrude Hawk Chocolatiers in the local Wyoming Valley Mall, was "hugging his mother...begging for one of [Gertrude Hawk's] chocolate ladybugs filled with peanut butter." Irving "eventually" got his mother to buy one, leading to "countless hugs and 'I love you's'." However, Irving has shown a near constant love of his toy train set since he received it for his birthday late last July. Based on the previous, it should be clear to more than UnNews' fact checking department that David Irving's love for his mother is not more than two standard deviations of the mean from the national average, and is therefore unremarkable.

THE FACTS: Additionally, it can be shown that likely the last thing on David's mind when he wrote this was sincere hope that his mother appreciated his gift. According to Lionel, who strongly recommended that David write the card, "In all sincerity, I think he only drew up that card to prevent [Lionel] from bugging him to do it any longer." Continued Lionel, "[i]t took quite some time to coax that kid. He demanded a 100 Grand [Bar] in exchange for drawing up the card."

THE FACTS: Irving's claim of picking his mother's gift himself is subject to considerable doubt. In fact, neither David Irving nor his father, Lionel, chose the gift that they purchased for Linda Irving. One could give some credit to the Irvings in that they set out to the Macy*s in the aforementioned Wyoming Valley Mall with the intention of choosing a gift for Linda Irving together (already disproving David's assertion.) However, Lionel Irving's declaration of "[l]ets go out and buy mommy a gift" quickly collapsed upon itself when the two men entered the purse and handbag section of the Macy*s. According to Donna Sandroski, a saleswoman, "[t]hose two poor saps, father and son, were stumbling around the salesfloor like crazed prison wardens." Apparently, Sandroski "[sees] it all the time. [She] was obliged to help, and [she] chose the plainest, most universally-accessible purse [they] had." Added Sandroski, "What was I supposed to do? Let 'em wander around for ages, and lose a sale? I think not!"

All in all, while making some intriguing points, we at UnNews believe this card could have used a couple more rewrites before it was etched onto computer paper with crayons and bestowed upon his mother.

Featured Article  (read another featured article)
Featured version: 17 January 2010
This article has been featured on the front page. — You can nominate your favourite articles at Uncyclopedia:VFH.