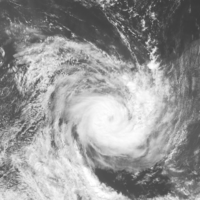 JAKARTA, Indonesia - It's April. Most of the civilized world celebrated Easter and got drunk when there are still, so far, no tornadoes in April. However, elsewhere in Indonesia, there is no drinking or Easter-celebrating.[1] 987 people have died in Cyclone Seroja in so far. It also hit East Timor, which, for no explainable reason, is currently in Winter, unlike the rest of Asia.

It was believed to be at its peak as of 06:00 UTC on April 5, at fifty knots. Recent developments have recorded its windspeed as having almost quadrupled, at around 197 knots. This has caused most houses, trees, and anything non-natural (and some natural things) to be blown over the Java Sea and wash up on the shore of Malaysia. This cannot be confirmed however, as when the wood hit the beach, most Malaysians swarmed out of their nests and devoured it. However, as we know from storms striking in poor countries (which are mostly full of dirt, and not much else), a huge threat from the hurricane are mudslides.[2] They can be extremely deadly, and this one is as well. Not much information is known about this storm, due to the Myanmar coup and the Myanmar military blocking the internet way too hard, leading to a widespread internet outage in East Asia.

The cyclone was considered Category 2, however due to the recent increase in power, as well as NOAA's current chairman Benjamin Fardman currently being in East Timor visiting his mistress, it has scared the shit out of him so badly that he demanded that it should be classified as a category 6.

But What's with the Name, Though?[edit]

However, one might notice Cyclone Seroja's odd name. Definitely not a normal, Anglicized name that us English-Speakers are used to. What gives? Well, after doing a bit of research, it turns out that "Seroja" means "dry leaves," which is simultaneously hilarious and bullshit. After all, why wouldn't you name your gigantic swirling super-thunderstorm after dry leaves? Whoever named this Hurricane must have been smoking some Seroja, if you know what I mean.

What's Seroja up to next?[edit]

Well, it appears this storm will make history, via the first storm to affect southern Western Australia. That's unique! Certainly nothing ever seen before,they all affect the northern portion. Perth may get severely affected and it's like a hurricane in California - really rare, it will scare the shit out of people. And we could easily see the death toll triple if it turns out to intensify such far south.