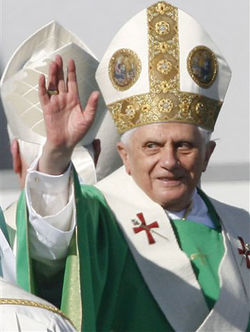 The pope's action has stunned millions of believers around the world

Rome, Italy -- Earlier today at the Coliseum, Pope Benedict XVI made history by unexpectedly dissolving Catholicism before a stunned crowd of thousands of believers. This startling decision can only be described as shocking, as millions of people were thrown into an acute spiritual crisis.

"Thinking about our faith," the Pope commented in his remarkably candid speech, "made me realize that people have believed so many things, for so long, that sometimes we just get confused by what we start out with before we can really judge what is the truth. As rational individuals, we must come to terms with the facts. Baby Jesus is not coming home. I don't know what's really out there, or what all of this means, but I know now that this answer sure wasn't it. It is time for us to move in a new direction." The Pope recognized that this was a painful time for many people across the globe, expressed sorrow for having to cause such pain by his actions, and recommended that they pray "to something" to help them cope.

The Pope expressed "a deep and painful sadness" that so many people had misplaced their faith over the last two millenia, many of them denying themselves "love and vibrant, rich sex lives," and of course also for the many martyrs who gave their lives for the unusual faith's cultish beliefs, many of whom died in ways that the Pope said "give me the willies." But he deflected blame from the church, saying "It wasn't our fault that everybody was gullible enough to believe us. In fact, I'd say it is really your fault instead."

On a lighter note, the Pope expressed "great happiness and joy" on his finally entering the singles scene, and boasted of his tens of marriage proposals which, although over half came from within the Vatican itself, span the world. Dr. Ruth commented on her radio show that this showing was "very impressive for a man of the Pope's age, condition and experience." Isadora Alman of the New Havan Advocate also expressed good wishes for the Pope's new life, writing in response to the recent letter he wrote her love advice column: "It's never too late for love, even if you're the head of a major world religion that thinks it's evil."

The Pope closed his remarks by stating that he would reluctantly dedicate the remainder of his life to helping organize the huge process of selling off the property of the Catholic Church, a task experts project will probably require an "extremely large amount of time." He also remarked that he had just contacted Sotheby's regarding the auction of St. Peters next year, and proudly noted that publisher Bob Guccione had already expressed an interest in the historic site years earlier in a casual chat. "It will fetch a good price, and it will also be a very exciting auction to watch, I think," the Pope said to the huge crowd. He then formally resigned his post from the podium and asked everyone to call him "Josef" or "Mr. Happy" in all future correspondence and speech.

Reaction around the world was confused. "This is the biggest shake-up since the Mayan religion was proven to be a hoax last year," said published religious scholar Dr. War Davis. "I don't know how much more of this sort of thing the world can take." Dr. Brax Oxuxsnubbbumaderic, a local dermatologist who received his M.D. through a correspondence course, observed that since the Pope was no longer infallible now, he could be wrong, and advised people "not to rush into anything they might regret later," to "take time to figure out how you feel," and to "avoid scratching rashes, as it feels really good at first, but then it just hurts even more later."

The concerns of both may be justified, as it is reported that the head Rabbi of Israel has been "deeply moved" by the Pope's "actions, statements, and conduct", is considering a similar move regarding Judaism, and is in conference with several experts, politicians and well-wishers "almost around the clock." There is no word yet from any Islamic authority as of this writing, but in this writers opinion the fall of these faiths would have relatively little significant impact, as the practitioners involved will simply find something else to be cranky about eventually, and everything will pretty much be the same. 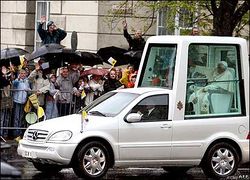 Despite the dissolution of Christianity, the Pope has expressed that he wants to keep the car. "It's comfy," he said.

These hesitant, confused sentiments as people try to find a path in a suddenly much more bewildering world were further reflected in the voice of the common citizen. Individuals spoken with Catholic persuasion from a nation whose name has been withheld at their request stated that they expected the national custom of killing random people to continue despite the breakdown of the faith as it made things "more interesting." They also expressed hope that the custom of killing Englishmen would be retained as well, and requested that I mention that country's name and say something bad about it, the latter request from which I shall refrain for the sake of my professional objectivity. While this reporter is well aware that these sentiments may not be representative of this small nation as a whole, there was unfortunately no other side to this position available.

Europe was awed into silence, as both the small man of uncertain nationality and the unconscious man I spoke to had no comment. Calls to several people in China and North Korea were inconclusive, as I knew neither language and unfortunately couldn't understand what they were saying.

Reaction from clergymen in the United States was predictably overwhelmingly negative and incredibly boring (although, oddly, a lot of Protestants didn't seen quite as upset as you'd expect). The reporter did gain a unique perspective on the situation from Reverend Sharpton of New York, who graciously agreed to speak with me on the telephone, making his voice heard as a comfort to all in this time of turmoil and difficulty.

Sharpton seemed to summarize his thoughts on the matter when he commented that he personally felt, after a good deal of thought, that the fall of Catholicism, and, by extension, Christianity, was a good thing in the long run, asking the moving question "People, I ask you, what kind of poor jerks would devote their entire lives to worshipping a Jew? This has always been a source of deep pain for me and many others, and now we don't have to suffer anymore. I always figured that those Roman perverts had a pretty good idea anyway."

When asked to clarify this last point, Sharpton commented that although he was opposed to the crucifixion of more Jews at this time, since "some other idiot would probably just make another silly religion out of it and confuse everybody all over again," he stated that, perhaps in some future day, when man was "more than he was today," it could be done without fear of this danger. He also suggested that it might be beneficial to construct a replacement for Christianity in the meantime so people would not be sad, and recommended that God be a Democrat.

One child I spoke to was not so jubilant about the change, however, reminding us of how difficult times like this can be for the children, often the most sensitive, spiritual ones of us all, and his view may perhaps be the one of the greatest weight. When asked what he thought of the decision the Pope had made, he spent a moment in thought, and perhaps made what was the most heartfelt, simple comment on the whole matter that I heard out of all the people I spoke with in the course of preparing this piece.

"I'll miss those little crackers they give you," he mused, idly kicking the ground with his shoe. "They're tasty."