UnNews:Choice of which product to buy last vestige of freedom for most Americans 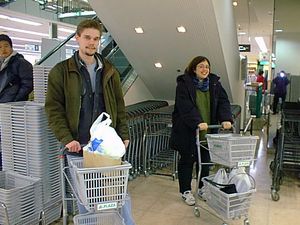 Two Americans in the midst of exercising their last vestige of the freedoms once promised them by the U.S. Constitution.

Washington, D.C. A study issued by the Rand Corporation has revealed a startling conclusion: the lives of most Americans are profoundly unfree, despite the frequent description of America as a beacon of freedom, and as protected by the "Bill of Rights" in its national anthem.

"Our study found that, while America remains long on ideals, it's short on actual everyday realization of those ideals. The unavoidable conclusion is, unfortunately, that for most Americans, faced with a stagnant economy, high income tax rates, overcompetition for the fewer and fewer remaining jobs that actually pay a living wage, and inflation that is expected to worsen, together with already spiraling increases in the cost of living for millions, practical day-to-day freedom remains a luxury few Americans can actually afford to enjoy" explained Brian Stockhouse, Ph.D., describing the controversial study. "Our researchers identified shopping as the last refuge of absolute freedom left to the average American."

While some critics of the study objected that Americans still retained broad educational, artistic and political freedoms, these claims were sharply undercut by the crippling and unavoidable impact of the devaluation of the per-hour earning power of the average American, combined with the skyrocketing cost of even a modest lifestyle.

"It's all very well and good to say that anyone can go to the library and read whatever they want, listen to or perform music, or engage in other artistic, athletic or intellectual pursuits, but who has the time after working a seventy-plus hour week just to remain indoors and fed?" asked Dr. Stockhouse. "Not that many people, believe me."

Along with the seismic destruction of the quality of life and related practical freedom of millions of Americans wrought by forces such as increasing globalization, outsourcing of jobs, corporate condensation and increased competition worldwide for an ever-shrinking pool of natural resources, the government's reaction to the terrorist threat appears to be at the brink of spinning out of control itself, the study claimed. Dr. Stockhouse noted that he had cancelled his telephone service in the wake of the recent revelation that the government was keeping a log of whom he, along with millions of other Americans, made calls to. "It's inconvenient, yes, but I avoid all the telemarketer calls. I suppose you could say I'm on the ultimate 'do not call' list" he joked. 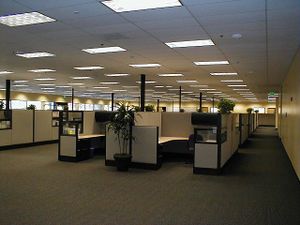 The study also noted that millions of Americans are detained daily in facilities such as these from eight to ten hours, or even longer, and required to perform what is called "work," the amount, speed, and compensation for which are all dictated from above, with little or no input from or concern for the workers. "Sounds like fascism to me," opined Dr. Stockhouse.

Dr. Stockhouse also noted the weakness of the protection actually provided by the Fifth Amendment to the United States Constitution, citing this legal reality as a major cornerstone of the study's conclusion.

"Basically, anything you own, write, draw, type or create is discoverable as evidence that may be used against you on any charge that you may be brought up on" stated Dr. Stockhouse. "Keep a diary? That can be used against you in court. Like H.R. Giger? That can be used against you in court. Remember Robert Bork having the list of videos he rented brought out during his failed senate confirmation hearings? Think about that happening, only to anybody. While the government cannot discover the existence of these materials by asking you questions, it is allowed to demand that you turn over whatever property, writings, drawings, et cetera it finds out about the existence of through means other than your own statements, and there is no way to avoid compliance, even if those materials contain statements made by you that are against your interest."

As for one of the most treasured American freedoms, the vote, Dr. Stockhouse noted that American politics had sold the store to the billionaire class decades ago, and the only difference between now and fifty years ago was the rise of ever more corporations with ever more billions of dollars, and armies of lobbyists to gain direct access to the government. "An ordinary citizen, armed with his or her vote, and some well-thought out letters of concern to their representative, seems to be as poorly prepared for a political rivalry with, say, the Coca-Cola company, as I would be in a foot-race against a Ford GT. We ought to just scrap the current antiquated system and allow the companies to choose the members of congress, the president, and the judiciary. It would at least be honest."

Dr. Stockhouse concluded by stating that, as of yet, there is no known government program to determine what soda brands, detergent, cake mix, et cetera, are preferred by terrorists, leading to the study's conclusion that shopping is the only remaining vestige of American freedom. However, given the potential for political change, the future in this area remains hazy and unclear.

Most Americans interviewed for comment declined to speak to our reporter, as they were in a hurry to get to the store, following which they planned to fall asleep in front of the television.

Featured Article  (read another featured article)
Featured version: 2 December 2007
This article has been featured on the front page. — You can nominate your favourite articles at Uncyclopedia:VFH.