THE INTERWEB -- In a remarkable story broken by MSNBC.com today, it was revealed that President Bush was responsible for the cannibalizing of African American veterans. We thank MSNBC for bringing this story to light and credit them for the title thereof and for this image: 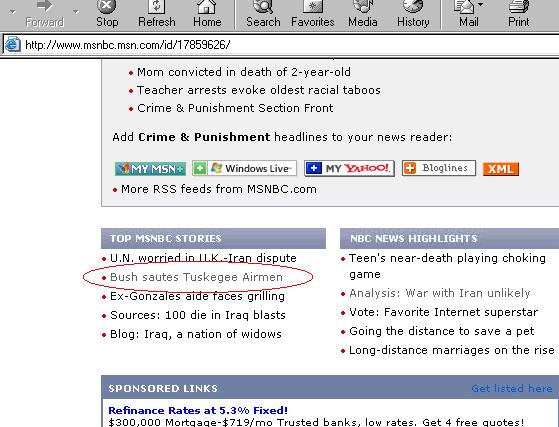 Agents from the FBI were first confused, as Bush had been telling them that it was likely just random mutilations. The credit for the discovery went largely to agent William Graham, who had this to say:

"I realized that all the parts he was cutting out of the victims were particularly delicious, and then he stabbed me in the stomach. That's the last time I vote for him." 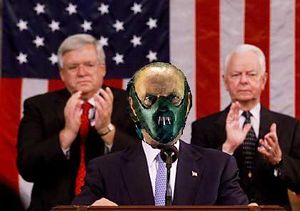 At a press conference, President Bush did not dub Agent Graham a terrorist and reveal his wife's job at the NSA as expected. He did however express interest in "Eating his liver with some fava beans and a nice chianti".

Bush said he had gotten the idea to eat human flesh when a Kazakhistani reporter invited him to drink the blood of every Iraqi man woman and child. However, Bush claimed the Iraqi meat wasn't fresh enough, and declined.

Some experts speculate it may be a mix up, owing to the letter L being accused of terrorism. All Ls were removed from Bush's daily planner and he may have become confused, just as he was confused when all pretzels were removed from his diet after a terrorist attack on his throat by Shneider Al Hannover

Regardless, Bush's supporters have hailed the decision to eat African American World War 2 veterans as a showing of Bush's multiculturalism. They claim that no one would eat black folks unless they respected their marvelous culture and history.

Not to be outdone, the Democratically controlled Congress has announced plans to grill Bush Administration officials starting with an aide to Attorney General Gonzales. "We were going to have a barbecue, but some members believed it was a bit too redneck" explained House Speaker Nancy Pelosi. Senator Charles Schumer, acknowledged the availability of more options, asserting "Whether baked, barbecued, or broiled, this Administration is fresh meat to me."

Karl Rove, recently returned from his secret vacation with sweetheart Cindy Sheehan, noted the President Bush has a healthy preference for plain foods, and wanted to convey to Black Americans, the knowledge that they are held in high esteem and considered a delicacy "like truffles." Rove also noted that undocumented Mexicans would also be added to the menu soon, promising that room for "hard-working Mexicans" will be made in the President's intestines.

Confirming his new found respect for African Americans Bush stated "I love black people. They are delicious. Probably because of all that watermelon they love to eat so much."

Featured Article  (read another featured article)
Featured version: 17 April 2007
This article has been featured on the front page. — You can nominate your favourite articles at Uncyclopedia:VFH.