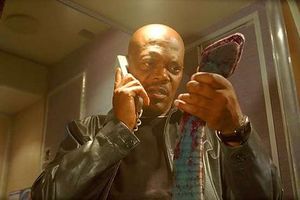 Samuel L. Jackson received a congratulatory phone call after being appointed as the new Secretary of Transportation.

WASHINGTON, DC -- US President George Bush has selected action movie star Samuel L. Jackson as the next Secretary of Transportation. The nomination comes after a month long search process following the resignation of Norman Mineta from the post. The 74 year-old Mineta resigned due to his old age, saying he was "too frail to find the terrorists anymore." He added, "I'm sure that hunk Samuel L. Jackson will do a much better job."

Mr. Jackson was surprised, but honored at the nomination. At a press conference in the White House Roosevelt Room, Mr. Bush explained why Jackson is the right person for the job, "Sam here has been in cars. He's been on buses - even trains. But most importantly - he's flown on airplanes." The president went on to say that in today's dangerous world of terrorism, the nation's transportation infrastructure must be protected from all kinds of threats. He assured the public that Mr. Jackson would make flying safe and personally ensure that there are "no motherfucking snakes on any motherfucking planes."

Skeptical Republicans wondered whether Mr. Jackson, lacking any political experience, was fit for a cabinet post, but press secretary Tony Snow dismissed such speculation, "Take a look at Secretary of Defense Donald Rumsfeld - he didn't have any political experience, yet he is doing an exemplary job leading the war in Iraq." When reporters pointed out that Mr. Rumsfeld did in fact have lots of experience before being appointed, Snow reiterated the administration's position of "ignoring facts."

The new Secretary already has wide-ranging plans to protect the American public from "all kinds of threats to transportation - not just snakes." Included on his list are "bears on trains" and "bees on buses." Congressional leaders praised Mr. Jackson for staying on top of current events in planning his policies. Even Democratic party leader Howard Dean said he was impressed with Jackson's idea to "ban stingrays on boats" after Crocodile Hunter Steve Irwin's tragic death over the weekend. "And oh yeah - motherfucking crocodiles will be banned too," promised Jackson.