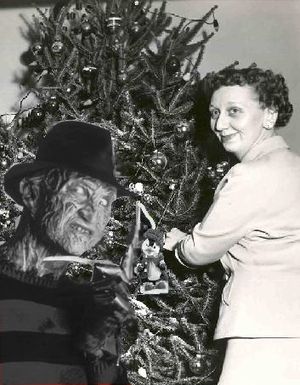 Bush plans to appoint Freddy Kruegger as the first director of the Deparment of Fear. When asked, Kruegger said that his first action is to "haunt all your dreams of memories of people I've killed, and September 11th."

In an unexpected move last Saturday, George W. Bush have announced the creation of a new department, the Department of Fear. "It's six years out from the tragic events of September 11th," says Bush as he reads his speech notes that have been stuck in a copy of My Pet Goat, "so people are starting to forget the reason that they rallied around me in the first place and gave me and my wife Dick Cheney god-like powers to do whatever we want. We want to remind the people that Al-Qaeda could at any time enter a busy city and blow themselves up, or enter your house and rape your wife, or enter your wife and blow themselves up. We want to remind the American public the fear of the terrorists is the reason they gave me unlimited power to violate human rights, start unnecessary wars to further feed our addiction to oil, violate people's privacy, bleed our country's treasury, etc. etc. This is the reason why it is necessary to create a Department of Fear, to create the perception that the treat of terrorism to their American freedoms are so great that they first have to relinquish their freedoms to me, so that I could give them to my hen-pecking wife Laura, so in turn they could be handed over to Dick Cheney." Once created, the Department of Fear will be in charge of making television and radio ad campaigns which will remind the public of the necessity to fear the terrorists, such as in a pilot ad with the slogan, "Every time you masturbate, the terrorists win. Please, think of the victims of September 11th." Also the department will be charged to create a fearful public atmosphere, such as a general suspicion that everyone around you could be a potential terrorists, such the "Grandma could be al-Qaeda" campaign, along with various other inconveniences such as disallowing nail clippers on airplanes because they could potentially be used to hijack an airliner. Large amounts of "fear dioxide" is planned to be released into the air to change the atmosphere and create a "climate of fear."


Democrats question the necessity of creating a Department of Fear. "Can't we use the funds that would create the Department of Fear instead to build a communist welfare state?" says Nancy Pelosi. While Republicans have been less hostile towards the idea of the new department some have argued that the creation of a Department of Fear is redundant since Christianity already serves this purpose. "Once you are Christian you are afraid of almost anything," says a senior Republican senator, "evolution, stem cells, sex education, education in general, knowing about the cultures and traditions of people outside the United States, and tons more. What we need is not a Department of Fear, but to remind everybody to fear God, and all those so-called Americans who are vile Satanists should be forced to convert to Christianity on the pain of death the way they do it for Islam in the Middle East, then they will fear God." Despite criticism from both sides, Bush is pushing ahead with his bill to create the Department of Fear. The first action that the Department of Fear will take is to siphon money intended to create a better health care system into the Department of Fear. "For families who couldn't afford health insurance, this will certainly be a fearful thing to them," a Bush aid said, explaining the rationale of the department's action. The department's next move is to continue the administration's bellicose threats against Iran, trying to provoke a war there. "A potentially drawn-out and bloody war with Iran will certainly be a fearful thing for most Americans," the Bush aid further explains. Many believe that the reason behind the creation of this department is Bush's way of leaving a legacy. It is only by reminding people of the apocalyptic claims the Bush administration used to justify the war in Iraq that people will truly realize the necessity of the Bush administration's actions, be they for good or evil.