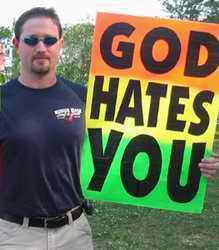 The people of Boston have picketed a funeral home in Massachussetts where the body of dead marathon bombing suspect Tamerlan Tsarnaev is being held and demanding he be mutilated rather than buried.

"How dare he ask for a burial?" demanded one protestor, Judith McGarrigle. "He should be torn to pieces by rabid dogs! He didn't think about the burials of those poor people he killed did he? They didn't get a chance to be buried." When UnNews pointed out that they did indeed have the chance to be buried - as did Lee Harvey Oswald and Osama bin Laden - Mrs McGarrigle changed tack. "One of those kids was eight years old! Eight years old! And you want to give that son of a bitch a burial?"

We moved away. Another instance of logical rhetoric being comprehensively rebuffed by the invocation of dead children.

Funeral home director Peter Stefan explained that his job is to bury everyone, even people who are not well liked. "Last year I remember there was this sexually abusive alcoholic who died of a heart attack. His family literally came up to me and asked me what the minimum was to dispose of his body. That was a very sad one. Then there was this guy, Boston born and bred, who supported the Yankees. Thinking about it, that was maybe my darkest day."

This intrepid reporter asked to see Tsarnaev's body, but was unfortunately duped by what I now know is a typical hazing technique in funeral homes. I was brought into a quiet, clinical room deep inside the home and presented with the vision of a bearded man lying on a slab. I breathed deeply, quietly, conscious at once of the reality of mortality, both his and my own. He promptly sprang into life.

When I stopped screaming, Stefan explained that this was his colleague, Jason, and there was no way he would show me the real corpse.

The lunatics outside suddenly seemed more palatable than before, and one, Terry O'Connor, drew attention to himself with a large depiction of his proposed mutilation of Tsarnaev's body.

"What I suggest," he said, putting down his Whopper to explain his drawings, "is that we drag his corpse through the streets on the back of a heavily-polluting car, then we cut him open, tear out his organs, chop his head off, and then tar the head and stick it on a spike with those other dudes who obstructed the police."

"It's the only civilized thing to do."

O'Connor's illustrated proposal of the mutilation.