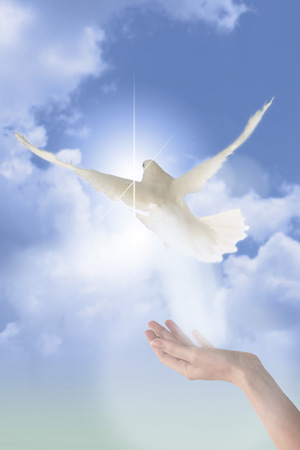 Some Reiki masters have developed their skills to such an extent that they can fire lasers from their palms, enabling them to get free food by shooting down birds in flight. This also ensures that they are always able to light their joints, even if they don't have any matches.

WASHINGTON, USA -- The annual United States Conference of Catholic Bishops, meeting in the US capital this week, has advised faithful people worldwide to avoid the alternative therapy Reiki which has no scientific proof and no place in Christian thought, they say. The Conference is a leading Christian organization, widely known for its popular illustrated pamphlet demonstrating how to minister to persons with homosexual inclinations.

Reiki, claimed to be "spiritual healing without energy depletion", involves the movement of healing energy (known as ki) through the palms of the hands and is used as a treatment for ailments as diverse as hayfever and cancer. Reiki was developed in 1922 by Mikao Usui of Japan after he spent three weeks meditating, fasting and praying. It has thousands of practitioners worldwide, along with hundreds of thousands of patients who will testify to its effectiveness - however, it should be remembered that the vast majority of patients are hippies and hippies will believe any old crap so long as the practitioner has a few bells, a dreamcatcher or two and the occasional perspex pyramid hanging about in their surgery.

The conference's doctrine committee has also stated that the practice is dangerous because it involves the re-balancing of what Reiki believers term "universal life energies" which, the bishops say, goes against Christian belief. They also felt that the "laying on of hands" by the Reiki master, the method by which energies are rebalanced, is suspect; though they took great pains to distinguish this ungodly practice from their own laying of hands upon choir boys."The radical difference between Reiki and healing by divine power is that Christians heal by way of prayers to Christ, whereas Reiki is a technique," they said. They demonstrated their point by attempting to record minutes of the meeting by praying to Jesus and asking Him to record them on His cassette recorder so He could later send them a copy in the mail, rather than using the more usual technique of writing them down. Your UnNews reporter, who recorded the conference from start to finish, later made a tidy addition to his wages by selling a tape of the discussion to the bishops when they discovered Jesus had used His last blank cassette to tape a Led Zeppelin album He borrowed from the Arcangel Gabriel.

The bishops also claimed that Reiki has "no support either in the findings of natural science or in Christian belief" and that to use it, they warn, is "to operate in the realm of superstition." In view of this, they advised all Catholic chaplains, spiritual retreats and healthcare institutions to immediately cease using the technique and to instead concentrate on normal, scientifically-credible practices such as the weekly consumption of the blood and corpse of someone who died nearly 2000 years ago.