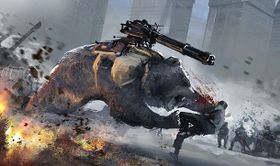 The National Park Service is investigating the man-eating bears' ties to Russia and Vladimir Putin.

SCARY FOREST, BEAR CITY -- While most Americans who haven't accepted the Donald into their sphincters dread his hacked up budget proposals, the army of invading bears lurking deep within the twisted forests just outside your home have instead been celebrating Trump's planned downsizing of the National Park Service (NPS). Hordes of armed bears were seen cheering-slash-growling when news of Trump's $1.5 billion Interior cuts fluttered into the scary woods just beyond your flimsy window.

The leader of the bear army poised to invade America (known only as "Skullcarver" due to the caved in human skulls strapped to his furry hind legs), spoke of his anticipation for Trump's budget cuts: "Well, you know, it's tough being the head warchief of all invading bears who also have guns, you know? Every time we bears try marching into your human cities, your park rangers always stop us with their bear mace and that thing they do when they play dead but aren't. Gets us bears every time."

Mr. Skullcarver, ruler of the warbears, was of course speaking of the esteemed Park Rangers of the National Park Service, the country's first line of defense against the woodland animals threatening to eat your family. The NPS was formed in 1916 to fend against the onslaught of gun-toting bears ravaging the human towns that hug the strange and unforgiving wilderness. Without the protection of the Park Rangers, the people of these vulnerable communities will have no choice but to season themselves to the bear's specifications.

Trump's budget gouging has kept millions of Americans drowning in anxiety, whether they fear drowning in medical debt or being viciously de-spined by a rabid grizzly, but Mr. Skullcarver (the George Washington Carver of bears), remains in high spirits.

"For the first time in years, I can say I'm looking forward to the future," said Mr. Skullcarver, as his bear minions mounted a shiny new machine gun onto his furry bear back.