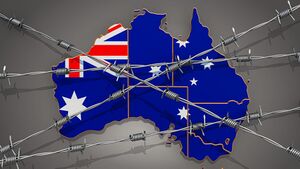 Instead of just sending the entire island continent to Guantanamo Bay, they just put barbed wire over the place, hoping the Australians would be too drunk to even attempt to climb over it.

HOUGHTON, Michigan -- After an Australian exchange student responded to a question asked by one of his teachers that contained the use of Aussie slang in it, the American students at Lake Superior State University have started a petition to ban all Australian slang, phrases, and words from what they call the "greatest country of all time."

The exchange student said, "No worries, mate" — a regional alternative for "You're welcome" that usually baffles Americans. The teacher to whom the strange phrase was told to explained, "If I’m not worried, I don’t want anyone telling me not to worry." The word "mate" also had homosexual overtones that annoyed the locals.

Other Aussie phrases and slang the petition proposes to ban include: "Yeah, nah", "Nah, yeah", "Arvo", "Biccy", "Bloody oath", "Bogan", "Bottle-o", "Brekkie", "Ciggie", "Coppers", "Choccy" and "Defo" — the gist being it shows laziness to shorten words to the point where only fellow Aussies understand what they mean.

The petition also seeks to ban phrases from Norway, Belgium, England, Scotland, Canada and surprisingly the US also. These include: "Wait, what?", "At the end of the day", "That being said", "Asking for a friend", "Deep dive", "New normal", "Supply chain" and "You're on mute", the latter of which would make no sense to ban due to the fact that kids are still saying it during online schooling.

While the petition is being circulated, President Biden has shown his support for it (though banning "Circle back" would hobble his own press secretary, Jen Psaki). Biden has asked acting Australian Prime Minister Barnaby Joyce to disclipine any Australian soldier stationed on a United States base, or Australian bases with American troops on them, to refrain from using slang and other Aussie terminology around their precious, Macca's-eating ears. Any Digger who disobeys the order will be demoted and transferred to Christmas Island.