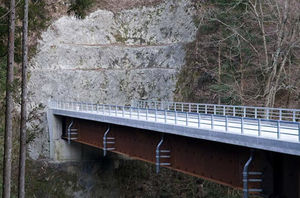 KETCHIKAN, Alaska –- Today Sarah Palin gloated over the completion of Alaska’s “Bridge to No-where.” The bridge connects the town of Ketchikan (population 8,900) with No-where (population 0) – and cost taxpayers the paltry sum of $320 million, UnNews reports.

Previously a ferry service ran to No-where, although some in the town complained about its long wait (60 to 90 hours) and fee ($9.98 per car) - round trip ONLY. But the Bridge to No-where, a project that once was a global embarrassment to the people of Earth and the U.S. Congress, is finally ready.

The bridge had become an object of national ridicule and a symbol of the fiscal irresponsibility of many in Congress toward the money entrusted to them by the taxpayers. It was also an embarrassment to the people of Alaska and to members of Congress who found themselves tarred by the same brush dipped in the muck of controversy. The bridge has become a statewide tourist destination for visitors and fellow Alaskans alike.

David Raskin of Homer, Alaska, wrote, “Alaskans and the Nation owe an apology to Sarah for their selfish shortsightedness.” In the Ketchikan News, Dave Person wrote, “Thinking about the immense benefit, it occurred to me that the most effective thing about the bridge is that it leads to No-where.”

Despite the unwillingness of many in Alaska to pay for the bridge, Alaska’s congressional delegation dug in its heels, and many of the delegation’s colleagues, including all of congressional leadership, supported its existence.

Perhaps by recognizing that the citizens of Alaska, including many in Ketchikan, love the bridge, its detractors have been forced to resort to threats. One House Leadership staffer suggested that retribution could be levied by the removal of the bridge in a technical bill or other measure.

This is the sort of challenge that irresponsible Senators should relish and, through their vetos, show the House leadership exactly what they think of this childish threat. -- UnNews reports.

Most importantly, having a bridge to No-where shows the nation that there is a place for No-where people, and now all No-where people can simply drive No-where by crossing the bridge.