From Uncyclopedia, the content-free encyclopedia
(Redirected from Drive)
Jump to navigation Jump to search 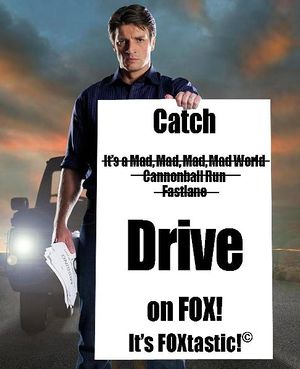 For those without comedic tastes, the so-called experts at Wikipedia have an article about Drive (TV series).

Drive is an American action drama television series created by Timothy Minear, creator of TV's Buffy The Vampire Slayer. After creating Buffy, 20th Century Fox was so desperate for Tim to create another series they sold him the country Great Briton, and all its citizens. Tim took these new-found slaves, and forced them to work on his new idea -- Drive.

Drive's other creator was Tim's elderly father, Ben Queen, who looks about 12 due to his use of skin crew products. Rumours circulating on the internet that Ben is creating a skin cream spin off show from Drive called 'Cream My Face' were confirmed false in 2007, when Ben said: "What?" to Variety. Which Variety turned into a 21 paragraph story featuring the words "Net", "skein" and "creamed" 102 times.

Tim divides his time between Drive and his other hit shows, Firefly, Wonderfalls, and The Inside.

Tim pitched the idea to FOX in a Powerpoint slide which said simply: "Cars Drive Fast! People die! Ratings, woosh!". This lead to FOX's undying love for the show.

In order to build the look for The Race, Tim and FOX considered using green screen visual effects to create the cross country look. However, they decided they couldn't be fucked with that, so instead had the Evil FOX Empire Slaves of Great Briton build the external locations themselves. Unfortunately, the citizens of Evil FOX Empire Slaves of Great Briton were drunk whilst carrying out the work, leading to the opening episodes set in Florida having mountains in the background. This goof was explained in episode 1x16 "Fury's Quit -- FUCK FUCK FUCK", in which it is revealed nobody but the contestants can see the mountains, as it's something to do with magnetism and giant black smoke.

Drive has now been on the air 3 years, and currently averages 23 million viewers. Unfortunately FOX are still on about canceling it every year, which has lead to many budget cuts. In place of car racing, the show is now about mountain biking.

Drive's theme song is written by Joss Whedon. The lyrics are:

Created by Minear Who can't escape my shadow

The show soundtrack is not available to buy on CD.

Firefly stars 'Nathan Fillion' as its lead (Alex), who is racing to kidnap his wife.

Alex's wife Amy is played by 'Fred Acker', best known for her role as "Alex's Spooky Delusion Appearing in the Form of His Wife in the New Hit FOX Show DRIVE!" Amy is racing to get her groove back.

Drive features regular cross over episodes with other shows. In 4x03, Betty Suarez joins The Race with her sister, Hilda Suarez. Unfortunately, Hilda and Winston meet mid episode, which caused the cameras to explode as two universes collided. Kevin Alejandro is still missing.