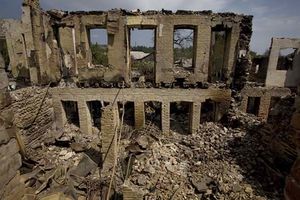 A typical primary school in Manila.

As the Global Ambassador of the United Nations Commission on Bullet Safety, Yeoh has donated approximately 300 million Kevlar helmets and armoured vests to school children around the world, particularly in places like Iraq, Serbia, the Sudan and Chicago. [Citation not needed at all; thank you very much].

The UN included the Philippines in its global program, as random gunshots are the number one cause of death for Filipino school children, followed closely by jackal attacks. The commission estimates that roughly 1.8 million children are killed by stray bullets every year while walking to school or sitting peacefully in the cafeteria. Eighty percent of the incidents occur in the capital of Manila, one of the most bullet-infested cities in the world behind Baghdad and Detroit.

As the star of hit movies such as "Crouching Tiger, Hidden Dragon" and the James Bond film "Tomorrow Never Dies", Yeoh has first-hand experience of being violently shot at. "These children are constantly in a state of fear, whether from a random shootout, jackal attacks, or gymnasts flying through the open window," Yeoh said. "The least we can do is give them a Kevlar helmet and vest on the way to school, to help them attain a better and longer-lived future."

UN Secretary General Ban-Ki Moon (not to be confused with Earths moon) praised the actress' efforts. "Ms. Yeoh knows what it's like to be under attack herself. The UN is very grateful to have a spokesperson who has actually faced bullets and katanas, and is actually doing something about it."

The Philippine government has been unable to provide safety equipment for school children due to massive corruption deficits in the fiscal budget, which amounted to P2.8 trillion ($250) in 2010. The country's Department of Education considered equipping school children with M16 assault rifles for self-defense, but the meager budget was only enough to procure .22 air guns for 2% of the children.

Yesterday's Manila trip is part of Yeoh's Asian leg tour. The actress is scheduled to leave for Thailand on Friday, before proceeding to Rangoon on Sunday as soon as they figure out where it is.