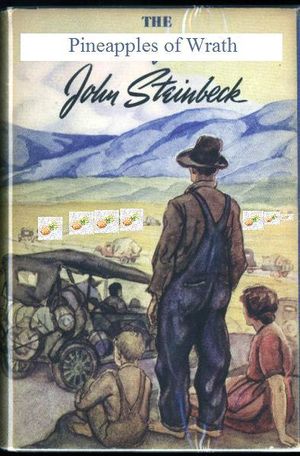 One of John Steinbecks Greatest Novels

Salinas Valley, CA. In a shock to scholastic types worldwide, officials at the Steinbeck Institute released a previously unheard of manuscript written by the world renown author John Steinbeck entitled " Pineapples of Wrath" under great pomp and circumstance. In the Main Exhibition Hall, under a black and white photo of Mr. Steinbeck sitting upon his favorite chair, and with the Salinas High School Marching Band playing "From this Moment On", Museum Curator D.M. Rounseville read a sobering speech.

"It has come to our attention that Mr. John Steinbeck's " Grapes of Wrath" was part of an "ilogy". He went on: "From the back of the kitchen in the cupboard early this morning, one of the cooks discovered a hithertoo unnoticed cardboard box. Inside the box we discovered pennings of Mr. Steinbeck that hithertoo had gone otherwise unnoticed." After several more transgressions and use of the phrase "hithertoo unnoticed," Mr. Rounseville read a list of the manuscripts that had been discovered: