The Song Remains the Same 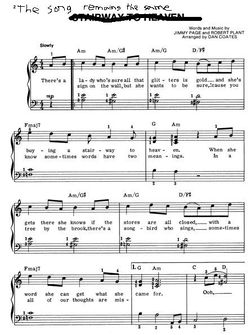 Inspiration came with a Xerox and went with a sharpie

"The Song Remains the Same" is a deep cut from classic rock band Led Zeppelin's album Houses of the Holy. It was originally intended, by writer and singer Robert Plant, to be a throwaway comedy bit aimed at critics who dissed the band by claiming that all their songs sounded the same.

For those without comedic tastes, the so-called experts at Wikipedia have an article about The Song Remains the Same.

Plant was inspired by a damning review by famed Village Voice journalist Robert Christgau, who slammed Led Zeppelin's derivative style in his legendary 1973 review of their existing discography: "

Jon Bonham and Jimmy Page were shocked and disheartened by the critic's negative attitude, but Plant was inspired to counterattack. In the bitter heat of a particularly briny mid-April evening, Plant hastily penned his musical revenge while the rest of the band was busy fucking a groupie with a fish. After a half hour of crumpled papers and Jimmy Page's sage counsel, Plant finished concocting his masterpiece and went to join his fish-fucking friends.

After the success of their previous self-(un)titled album IV, Atlantic granted the heavy rock band a generous sum of funds to record Houses of the Holy. However, notorious flibbertigibbet John Paul Jones spent most of their budget within the month on condoms and fish; as a result, the band had to rely on the previous tricks and techniques that got them through identical scenarios with their last four albums.

With a triumphant flick of his wrist, Plant placed his "Good Times Bad Times" 7" into the record player and applied his songwriting finesse by speeding it up a bit, like he did so many times in the past. Bam! One song down, seven to go. The band finished recording by 4:00 PM, pawned the remaining shoestrings in their budget and spent the spoils on beer, pizza, and quality time at their Cape Cod ranch.

The band released "The Song Remains the Same" as a single to wide acclaim and confusion. Peter Travers of Rolling Stone said, "Normally I review movies, but when a rocking riff this hard hits the shelves, exceptions must be made," though an intern would later point out that he was actually listening to "Black Dog" the whole time. The public reaction was equally positive; though fans realised the similarities to previous songs, everyone was too stoned to care.

The highest praise, however, came from the band's musical contemporaries. "It's a trip, it's got a funky beat, and I can bug out to it!" remarked Kool G. Funk of disco-funk superstars Kool and the Gang in salacious confusion, "puts me in the mood to seduce a sexy lady and fry up some succulent snapper. Or the other way around." George Clinton was also available to comment, but his interviewer refused to publish after Mr. Clinton insisted on replacing every noun with the word "funk."

Christgau, like many of the record's consumers, couldn't tell that he was being lampooned. "Led Zeppelin really hit the nail on the head, the song really does remain the same," said Christgau, who assumed that the band was conceding his point, "but I have to admit that their deference is starting to grow on me. Oh, and also this:

Though their vitriolic satire did not translate, Robert Plant and the band were not disappointed with their song's great financial reception. After a celebratory weekend exploring their loved ones and their caviar, the band arranged an massive tour and video centred around The Song Remains the Same. In thirty-nine states and eighteen countries, the band played over a hundred shows that glowed with energy and ecstasy, a feeling that was successfully captured in the eponymous concert video. The video epitomised the band's repetitive magic as they kicked out the same jams for two endless hours in an avant-garde performance that blazed the trail for House Music and Lady GaGa.

The tour concluded with a bang at New York City's Fillmore East, where the Zep blasted the audience with a four hour show and eight identical encores. After Page strummed the final note to what was possibly "The Ocean," the band stripped off all their clothes and ran straight towards the East River for some rest and relaxation, their rabid fans close behind. For the triumphant rock band, Shark Week came early that year.