The Book of Moron

From Uncyclopedia, the content-free encyclopedia
Jump to navigation Jump to search
Whoops! Maybe you were looking for User:Rock-O-Jello? 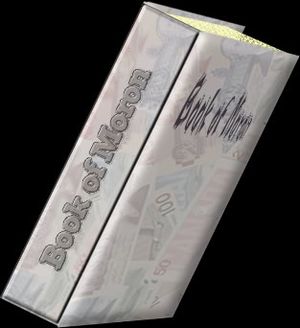 An actual Defecation of The Book of Moron; second edition

The Book Of Moron (originally known as The Necronomicon) is one of the world’s most sacred, yet elusive, holy books. This somewhat porous work has spread across all six of the continents as well as Australia. Advocates state that the book contains the secrets of the Morons. However, it is a well-known fact that many practitioners of Moronism have never read The Book of Moron due to their inability to read.

The book contains nearly 69 illustrated pages on the ways of Moronism. Forward to the latest edition by Rush Limbaugh, edited by Dick Cheney. Topics covered in this spongy tome include: Picking your nose in public; always getting it wrong; fire is hot; and a special introduction by US President George W. Bush.

The book of Moron is said to have been written by a group of well-known morons (rumored to include Martha Stewart) who had been relocated to Argentina after religious prosecution at the hands of He-Who-Must-Not-Be-Named. The book was originally bound in used paper napkins and each illustration was painstakingly drawn with Crayola crayons. However, later publications were bound in Canadian dollars and the images were hand painted using special inks that become invisible after they dry. The date of inception of The Book of Moron is unknown, but it is believed to pre-date sliced bread. After realizing that he had fucked up, George Bush contributed a page explaining that "wings cannot take dreams."

There is strong evidence that Moron missionaries surreptitiously evangelised the nation of North Korea after secretly converting the Great Leader, Kim Il-Jong and his heirs in the 1950s. It is thought that many of the tenets of Juche are derived from the contents page of the Book of Moron. Morons now dominate all facets of the North Korean leadership.

Recently the Book of Moron has been transferred to Beta tape. This new, revised addition has become highly popular among morons and their children, partially because it includes eight handy-dandy sing-alongs. The most popular of the songs include “It aren’t Just Road Kill, It's Dinner”, "I Wanna Be An Insurance Lobbyist", “Get Yourself on Welfare”, “Tomatoe, Pacific; Specific“, “Grammar Pebbles“, and “Twinkle Tinkle Little Star”

There are further plans to create a phonograph record of these songs, for the enjoyment of 78rpm phonograph player owning Morons. One leading Moron, a Mr. Frank Cote, has insisted that 8 track tapes be issued as well and is quoted as insisting "Who the hell can count to 78, my sister and me and our 4 kids will be lucky to get to 8!".

The Book of Moron has created controversy all over the world with its pro kitten huffing attitude, and its favoritism towards the mullet. Many non-morons have called this book and its unlearned followers idiots.

Despite the fact that until recently Moronism has been considered a sect of Catholicism; the Catholic Church and all of Christianity have turned the Morons away, saying that they can no longer support the Moron community and its special needs. In many countries the Book Of Moron has been banned entirely. Most Morons are finding it harder and harder to find their niche in society. 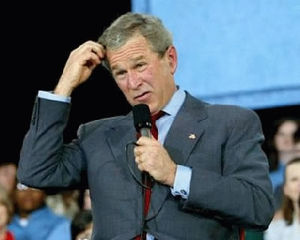 US president Bush advocates for the Book of Moron

One of the few countries that has not banned the Book of Moron, the United States Of America, has instead taken action by requiring a Surgeon General’s warning be printed on each paperback copy of The Book Of Moron. However, due to the nature of moronism, the warning was written in Moronic text, and cannot be reproduced by intellectual means.

Some even feel that the Morons are a terrorist propaganda group. Many Americans feel that the "Moronic doctrine" that requires all morons to knock on people’s doors and run away, then to come back three minutes later and leave bags of flaming feces is a terrorist act that prevents people from living peacefully.

The department of homeland security has investigated this issue and has come up with a list of known morons as well as their locations. Tony Danza, adviser to the head of Homeland Security and daytime talk show host, has also advocated that non-morons take advantage of the new “No moronic knocking” signs the government is now distributing in all major papers.