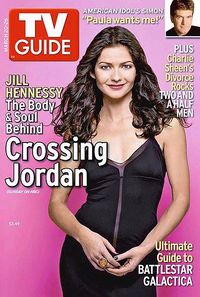 The Japanese Version of TV Guide

Published from 1948 to 1988, TV Guide was a magazine dedicated to transvestites. In its early years, it boasted a subscription base of over 100,000, but, as transsexuals became more popular than transvestites, the magazine's popularity gradually declined until it ceased publication. The last issue appeared in June, 1988.

Initially, due to the homophobic climate of the forties, fifties, sixties, seventies, and eighties, the magazine purported to be a guide to television (i. e., TV) programs. It featured tables that indicated the scheduled programming of the television networks and local stations and articles on various celebrities. However, the covers often contained coded text, as is the case with the one shown here: "Crossing" clearly refers to crossdressing,and the "Body and Soul Behind Jill Hennessey," the actress pictured on the cover is an article about her hairdresser, a transvestite named Peaches.

Plays on words and double entendres[edit]

The editors relied upon plays on words and double entendres to get their messages across to readers. To the uninitiated, the magazine appears to be about another glamorous actress. In reality, the main article is about a glamorous cross dresser. Notice, also, the cover's reference to Charlie Sheen as representing "Two and a Half Men." The "half-man" allusion is obviously a reference to his transvestism. The caption in the upper right corner, "American Idol's Simon: 'Paula Wants Me!'" appears to allude to Paula Abdul, Simon's co-host, but insiders know that the Paula mentioned is the feminine name by which Simon is known when he dresses in drag.

Likewise, the TV Guide that purports to be about Stargate SG-1 is really about the double life that the cover's celebrity leads; Ben Bowder plays both the male and the blonde female on the series (as the close "resemblance" between them suggests). He is a transvestite who often plays such dual male-and-female roles. These are the "EXCLUSIVE On-the-Set Secrets!" at which the magazine's caption so coyly hints.

The magazine's supposed association with the Hollywood glitterati, many of whom lead secret or double lives, allowed writers to disclose juicy tidbits of gossip about the hidden lives of transvestite celebrities and others under the guise of divulging the "secrets" of the stars.

The TV Guide featuring David Boreanaz and James Marsters on the cover also shared a "secret" with readers: these actors also played the female characters Cordelia Chase and Buffy Summers, respectively, on Buffy the Vampire Slayer. The "Sneak Peak" to which the lurid cover refers is of the co-stars' "hermaphroditic assets."

Another device by which editors and writers made their secret subtext known to their readers was the juxtaposition of photographs and text that, separately, meant nothing unusual but, placed side by side, created a message unmistakable to transgender initiates. Notice the small photographs inset at the top right corner of the cover, labeled, "SECRETS OF THE NEW SEASON"? The secret is "out," displayed in the captions that accompany these pictures. The one on the left reads "Survivor 's Jeff Probst." The one on the right reads, "Alias Jennifer Garner." The magazine declares the two are the same person, as "alias" means "also known as." Jeff Probst is Jennifer Garner and vice-versa! Of course, only those in the know (namely, TV Guide's subscribers) would understand what the coded message is saying. From the public at large, Jeff-Jennifer's secret would remain a secret.

TV Guide: notice the inserts and their captions

Sometimes, the magazine's covert messages were almost overt, as in the case of the headline that blared "Joey: The Girl Next Door." Only the fact that "Joey" can be a unisex name allowed the thin pretense that the Joey in question is a female rather than a male dressed as a female. Again, TV Guide's readers were aware that the "actress" featured on the cover is a cross dresser, not a genetic woman, and that "she" is, as such, one of their own.

Only in the latter half of the magazine's final decade did America's morals become as loose as a transvestite's bowels, allowing the publication to out itself as a periodical dedicated and devoted to all things transgender, and its cover became increasingly lurid and, some suggest, began, seemingly, to parody itself. The word "Transgender" appears after the main title, revealing that TV Guide has, all along, been about transvestites, not television, although this issue includes an article, "Transgender and Family Values" about how television situation comedies, or sitcoms, can use humor to help transvestites transition from their male to the female selves.