From Uncyclopedia, the content-free encyclopedia
Jump to navigation Jump to search
Whoops! Maybe you were looking for Sooty, or Ho?
“They even offended gingers in one episode! GAARRRGH!”

“Warning! Two dangerous criminals, Matthew Corbett and Michael Rosen have broken out of Broadmoor prison. They are considered dangerous you should contact the police if you see them”

~ Dubious statement made by Soo the panda in the episode 'Soo's bastard babies (aka. Soo and the gang bang)'. 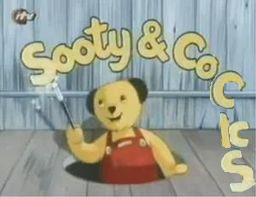 Sooty and Co is a British children's TV hosted by none other than notorious sex offender Matthew Corbett. The show was eventually banned in 1999 and the title of the show was changed to Sooty Heights and new presenter Richard Cadell was introduced the first presenter on the show with no criminal record (that all changed with the episode 'Semen semen everywhere'.) The title changed yet again to just 'Sooty' the next year due to the controversial nature of the 'Heights' part of the title which according to Tipper Gore, the mother of all censorship, was "inappropriate" and displayed Sooty as a ganja smoker who liked to get high (which is true).

General Plot of each Episode[edit]

For those without comedic tastes, the so-called experts at Wikipedia have an article about Sooty & Co..

Sooty and Co rose to fame in 1990 when Matthew Corbett escaped from Broadmoor prison, after being arrested for armed robbery and breaking and entering (that's what she said) with partner in crime Michael Rosen. Matthew grabbed together all the puppets he could find in his bedroom and said "Fuck it, I'm starting a TV show." Matthew found his friend Richard Cadell (as mentioned before) and made the first episode. The first episode itself was enough to gain Corbett and Cadell the fame in the showbiz world. The episode's name was 'moving in (and out of your arse)'. The very first scene involved the puppets settling nicely into the playboy house playing a game of limp biscuit (which Richard Cadell puts a stop to). In the next scene, Sweep and Kipper upload naked pictures secretly taken of Miki the cat and Soo the panda undressing. The boys high five and 'naked pictures' by the band Electric Six plays in the background. Matthew Corbett sits on his bed explaining how much he loves his new home, to which he is rudely interrupted by Richard Cadell and Michael Rosen in the bedroom next door. Corbett for half a minute straight listens to the dubious noises coming from the bedroom and eventually shouts "Oi! keep it down, poofters." Sooty appears next to him with dreadlocks and a ganja pipe describing how much he loves getting high, which is shocking seeing as Sooty is a puppet and can't talk.

The next scene involves a live performance of 'fucked with a knife' by Cannibal Corpse. A blooper in the production of the episode was when Corbett was supposed to be interviewing the lead singer of the band, but he was no where to be seen. He was found five minutes later about to be tossed off by Soo (more correctly Rosen with Soo on his hand). Unfortunately, this scene was accidentally broadcast. Corbett, after the hectic day of filming the first episode, climbed into bed with his girlfriend Madonna, but their dubious passions are also recorded and broadcasted. It broadcasted for childrens TV all across the world. It was banned within two weeks of it's release. MI5 were sent after the offenders, but the cast of Sooty and Co spent much of their time on the run, setting up makeshift studios. Cadell after this point, left the troupe and was replaced by Madonna and Glen Benton of Deicide. 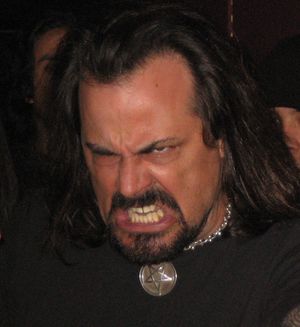 Sooty's ma buddy! Anyone cussing, gets sacrificed to Satan!

Many teens and comedy show presenters found it 'hilarious' and the episode was even shown on comedy shows to live audiences. The consensus amongst television critics was that "It was a shame about the five minute overrun, but hey ho, that's the way life goes."

The theme song was sung by Matthew Corbett, Dave Corbett and Morbid Angel at the beginning of each episode.


There's Glen Benton, Madonna,
Matthew, Mike and Rich,
Connie and David
Having sex together too!


They'll become your whore
The terrible four
Just you wait and say,
Sooty and Co fucked me!

Cocks Galore and other Controversies[edit]

Other controversies include homophobia, racial insensitivity, antisemitism and execution. The puppets were seen in one episode wearing towels over their heads pretending to be jihadists. They ran amok around Manchester shooting people up with AK-47s. They shot up 10 people and a turnip (it was a pity about the turnip). In another episode, Sweep and Butch are seen saluting Hitler. In the final episode 'Final Farewell (piss off everyone for good), they accidentally spill petrol on scampi causing him to catch fire (as the smoke from Sooty's ganja pipe is always present). Miley Cyrus made her acting debut in this episode and was nearly killed in the fire. In an intoxicated rage, the puppets burnt Miki as well and hung Ramsbottom. The emergency services arrived and took Corbett and Rosen back to broadmoor and five hours later, found Miley Cyrus (she was at the bottom of their priority list).

Sooty and Co is widely considered 'the most evil children's show on Earth'. The future incarnations of the show were superficially more appealing to children, but seeing as Cadell made the episode 'semen semen everywhere', he was also taken to broadmoor along with Madonna, Glen Benton and pretty much anyone else involved with the show. This is effectively where the shows ended, as no one was interested in the boring, politically correct episodes made under the name 'sooty' and ratings flunked. They had a ritual bonfire with the rest of the puppets.