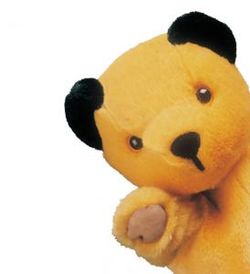 “I’ve just gotten off the phone with Sooty. Couldn’t understand a fucking word of it!”

“Sometimes you just have to laugh at yourself. But if you laugh at me, so help me God, I will cut you”

The early years came a little too soon for Sooty’s mum, Paddington. (And yes, Paddington bear was a chick, so don’t you dare try to destroy my childhood memories.) Anyway yeah, so Paddington was finding it hard to cope as a single mum, turning to prostitution and money laundering as a way to fund her son’s social, literary and vocal retardation; a condition him and his cousin ‘Sweep’ share. This genetic condition is known as ‘Autisti-dyslexi-mutism’. This condition was discovered by Soo, who went on to be a care worker on the semi-retarded Sooty’s show. For this unselfish behaviour Soo was nominated for a MOBO award, but lost out to fellow East-Londoner, Nev, the former Smile! TV star. Sooty’s condition led to so much bullying at school and in his first job at ASDA, where children and staff called him so many names leading Sooty’s deep depression. To his credit, he never complained once. But that could be due to him being a mute. Some people have claimed that Sooty was actually a selective mute, meaning he can only talk in front of certain people. If this is true then Sooty could obviously only whisper his sweet nothings into the ear of bezzie mate and puppeteer, Harry Corbett. Some people believe that Corbett was a huge bullshitter, who actually had no idea what the fuck Sooty was on about, and made it up as he went along. Most people believe both Harry Corbett (the original presenter) and Matthew Corbett (his son) were liars because if Sooty was indeed involuntarily selective of the people he was mute around, then why would his subconscious allow him to talk to a ginger virgin with a puberty beard and his dad?

For those without comedic tastes, the self-proclaimed experts at Wikipedia have an article about Sooty. 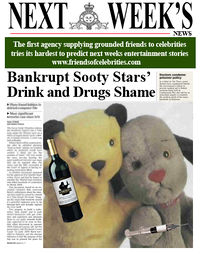 After 20 years of the same bullshit preschool lessons being taught to the weekly viewers, Sooty got a magic wand. This wand allowed Sooty to convince the producers that it was actually worth making another 40 years of the same old shit, as opposed to repeating old episodes and saving everyone a hell of a lot of time and money. Matthew Corbett quit the show in the 1990s once he’d made enough money, causing Sooty to return to his previous state of depression. Sooty began to use his time away from the show doing cocaine off Sweep’s stomach during Leeds Festival, shooting up on trains, and generally getting very, very fucked up. Sooty and Sweep both hated their third fister puppeteer, who most people believe contributed to both of their addictions to crack. Sooty, being the stud that he is eventually became a part-time pimp, mainly to fund his drug habit since the Sooty Show wasn’t doing as well as it should during the credit crunch. Neville the Blue Bear, a good friend of Sooty, was introduced to his hectic lifestyle, but unlike Sooty, Nev eventually overcame his addiction to crack. After Paddington had begun to give up hope on her son, things eventually began to turn around for Sooty. His new puppeteer had renamed the show and the future was looking bright. Despite Sooty reaching the twilight years in his success story, he still refused to go to rehab, saying that crack was the only substance to, “balance him out”. To which no one batted an eyelid. This caused the fall out with old pal Nev, since he had been such a media target, and Sooty had gotten away with everything. Nev decided the media hypocrisy would be best dealt with by committing adultery with his drug sponsor, and mate Sooty’s wife, Soo. This relationship did not last long before Sooty found out, sobered up and dealt with the situation in his own silent rage.

Over the past few years Sooty has taken up a job writing Christmas cracker jokes. He is most famous for the joke: “Q) What's yellow and dangerous? A) Shark-infested custard”. But during a crack-smoking session, Sooty began to write very rude jokes, recently losing him his job at the cracker factory. Among these Christmas crackers was an “Aristocrats” joke that Sooty had written, with very detailed illustrations of the joke. The final thing Sooty ever wrote for a Christmas cracker was, “Q) What do you call road kill in an hour? A) My whore of a wife”.

After the tragic passing of co-star Sweep on 25th June 2009, Sooty felt there was no more grief left in his tiny body, giving a heartfelt speech translated by Matthew Corbett during a touching Jonathan Ross interview:

“There are only a certain amount of times a bear can have his heart broken in one year. The breakup of my relationship with Soo, the disappearance of Nev; that cocksucker. And then Sweep, my old pal of 60 years dies. It was a sad day for me, CITV and ITV alike. But not the BBC, they canned us in 1967, so they can blow it out their arses. But yeah, I think the world lost something that day. We’re always doing road safety on the show, I just wish Sweep had stop, look and listened.”