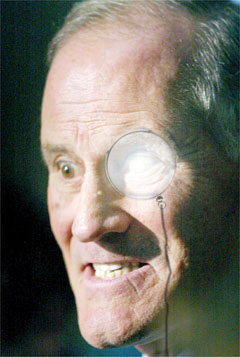 Are you looking for a career that's as glamorous as engineering?

Do you crave the giddy thrills akin to chartered accountancy?
Perhaps you envy the public acclaim and affection given to economists?
One career offers all this, and with a salary comparable to top Hollywood stars!
Yes - SCIENCE!

Become a scientist, and after mere decades of highly paid work and sexual adventure, you too could become a Renowned Scientist!

What is a Renowned Scientist?

It's a title awarded each decade by the Invisible College to a figure skilled in the art of Science! or Spelunking.

Categories include Most Taxpayers Money Spent Digging Holes in the Ground to Study Remote Stars, Most Small Animals Harmed (Physically or Psychologically) in the Production of Flawed Medicines, the always popular Swimwear Category, and of course, Most Self-Serving Appearances on Public Television!

Initiated in 1603 by Alfred Nobel's embittered half-brother Ian Nobel, the award confers a nasty faux-silver trophy, a postal order for £7, and of course world wide fame and glory!

Past recipients include the 3rd Viscount Trenchard and Erik von Daniken.

Renowned Scientist and Spelunker, Dave Trenchard was tutor to the young Thomas Babington Macaulay Jr. and discoverer of "Special" Forces.

It is also rumoured that he was involved in the assassination of Ludwig IX of Belgravia.

Trenchard was awarded the RS Prize for Confusing the Public for simultaneously proving that red wine causes and prevents cancer. BLAH BLAH BLAH

Curiously, the phrase "Renowned Scientist Erik von Daniken" appears nowhere else in the holy scriptures of the Interweb.