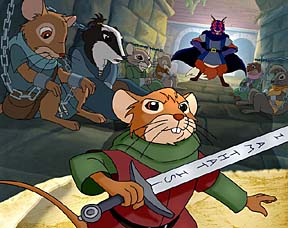 Redwall is a series of books, and a poorly done animation, about mice. There are also some other rodents thrown in for good measure. Redwall embodies themes such as violence, racism, hate and terrorism in books intended for moderately aged children. Because of this, it has gained a lot of support and is used as propaganda in certain countries. Redwall has been heavily criticized for the racism, gruesome violence, and realistic portrayal of WMDs.

Redwall features several prominent themes. The main ones are Racism, Violence, and Terrorism. In other words, the books are purposed to create violent hate.

In the Redwall books, mice, squirrels, hedgehogs, shrews, birds of prey, moles, passerine birds, hares and other slightly less repulsive rodents are portrayed as good. These typically have light fur colours. Rats, foxes, crows, ravens, wildcats, magpies, toads, salamanders, reptiles, all mustelids (except badgers and otters) and other 'evil' animals are portrayed as evil. The amount of characters who are exceptions can be counted on one hand. Not coincidentally, most evil animals are dark or black in colour. Considering the target market of white males between 6 and 14, this may have been a marketing move. However, it is much more likely that it is intended to stir up racist feelings, possibly as a scheme to control the world.

If you read a Redwall book you would find it incredibly violent. Scenes are described in brutal and gruesome detail, and both gang violence and war are heavily glorified. For obvious reasons, this is stated to make the books attractive to the target market. In reality, however, it is clearly to promote violence, possibly part of the same scheme.

Redwall appears on the outside as a peaceful Abbey. However, on the inside, it is far from it. There is a seemingly endless supply of weapons, armor, and biological agents inside, as well as 'Warriors'. Though they have never blown themselves up due to the lack of availibility of explosives, they are routinely observed endlessly chopping the heads off of evil rats. This has been compared to the September 11 attacks several times. In addition, there are the GUOSIM- Guerilla Union of Shrews In Mossflower. Portrayed as freedom fighters, they bear an uncanny resemblance to both terrorists and mudjaheddin. Lastly, Mossflower is geographically similar to the area around Lebanon and Israel.

This applies to every Redwall book. At the beginning, there is some catalyst event that has very little plot significance, the evil enemy is introduced, and so is the warrior (who isn't a warrior yet). Inevitably Martin's sword (a cheap knockoff of Excalibur) is introduced, and the hero(ine)(es) go on an excessively long quest. Redwall is attacked and about to lose when the hero(ine)(es) return and destroy the enemy once and for all. However, history repeats itself and it happens again and again and again. Also, some non-evil rodent that readers sort of liked and had a small plot siginficance dies.

Mossflower is largely forested, but there is a large desert to the east. Also to the east is the Salamandastron Mountain Complex, which houses legendary badger warriors and hares (later nuclear missiles and strike fighters) on the coast. There is a river that runs through Mossflower, some caves to the north and some cliffs to the south. And of course there is Redwall.

Unfortunately, whoever designed Mossflower must have a case of severe mental retardation. There are no cities, no villiages, and very few things actually live anywhere but Salamandastron and Redwall. Despite the lack of religion in the books there is a mosque and it is referred to as such. There is one mine and no known industry. It has been inferred that there was once a powerful civilization in the Mossflower area, or that Mossflower is little more than an overseas colony. The first explaination is popular and there is much evidence, including the existance of nuclear warheads and Salamandastron Mountain Complex.

Martin's sword is described as being made from a meteor and that it is Mithril. However, the description in the books does not fit the properties of Mithril. The substance that makes up the sword is most likely Uranium, judging by the atomic mass and electron shell configuration as stated in Scorched Earth. Martin's sword was lost sometime between First Strike and Redwall and later found again. It was presumed destroyed in the last book, Flashpoint, where it was used in a nuclear bomb. 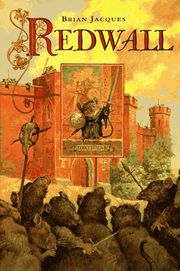 One of the books in the Redwall series.

The Redwall books were written in an arbitrary order with dubious continuity. The author had not thought about series continuity, and a gap formed between First Strike and Redwall.

General Brocktree-2008 An attempt to blend the traditional fighting of the series with human drama, General Brocktree follows a badger on his pointless quest to obtain chemical weapons. In the end, everybody dies, including Brocktree. Salamandastron Mountain Complex is supposedly founded, but in reality it was merely found. This book is regarded as crap even by hardcore Redwall fans.

Warriors-1999 This book tells the story of Martin the Warrior as he first invades a slave compound, and then kills an evil Russian cat and builds Redwall. It has been heavily criticized as condensed and containing nothing but non-stop senseless violence.

The Legend of Luke-2007 An obvious parody of The Legend of Zelda, with Martin as Link and some evil rat as Ganon. It compares favorably to the real thing. Martin dies in this book, ostensibly of a flu. However, the symptoms described are more in line with a cocaine overdose.

Foxtrot Uniform-2003 Regarded as the worst book in the series. A fox steals a rat from Redwall (he was evil anyway), there is a quest that ends in failure, and a bellmaker has something to do with it. A cache of plutonium is found and cast into the bell of Redwall. Most readers regard this book as terrible because of the lack of racism, sparse violence, and realism. However, hardcore readers are quick to note that the bell would actually reach critical mass and explode.

First Strike-2005 Salamandastron falls under siege, and two misfits from Redwall come to the rescue. A biological attack is unleashed against Redwall and an otter and a baby mouse must find a cure. This book is the shortest at only 220 pages long, lacks an ending, and has no real continuity with the next book.

Redwall-1987 The first book written. Redwall features a young mouse that must search for Martin's sword to cut a cake, which is being attack by Asmodeus Poisonteeth, a giant radioactive adder. Meanwhile, a very evil rat named Cluny The Scourge decides to seize Redwall to make it his summer home.

Mattimeo-1989 A fox named Slagar and his gang infilitrates Redwall disguised as a circus band. Slagar and his gang drug the residents of Redwall Abbey, steal several of their kidneys, and take their young to a kingdom called Malkariss, where they will be slaves forever and ever. It's up to Matthias and his friends to save their butts.

Critical reception has been largely negative, with reviewers citing the promininent themes, lack of realism, and repetitiveness. As one reviewer put it, "It may be just a kid's book, but it disgusted even my pre-teen and tennages sons." Readers, however, praise the prominent themes, lack of realism, and repetitiveness. As one reader put it, "It's like a drug. It may have bad parts to it, but while you are doing it it's awesome." Political reaction has also been very critical. Army General Rambo MacTavish stated "The idea of a smaller force of poorly equipped mice killing heavily armed weasels, stoats, and ferrets is an obvious statement against the American occupation of the Middle East!"

Redwall has an active fanfiction community. Unfortunately, most of the fics are het, slash, and angst. There are a few good parodies, most of which unfortunately receive terrible reviews and have the authors abandon them, and some legitimate Redwall-style adventure, which understandably usually receives terrible reviews.