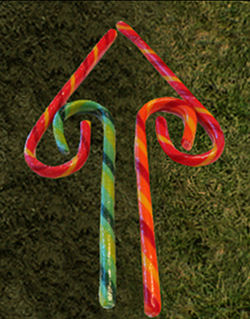 For those without comedic tastes, the self-proclaimed experts at Wikipedia think they have an article about Punji stick.

Imagine you're a grunt drafted into the Vietnam war, on patrol in the jungle at night. It's raining, the place is crawling with snakes and leeches. All of a sudden machine gunfire breaks out and you're being ambushed - bullets are hissing past your head, friends are getting killed all around you. Someone yells, "Đó là một cuộc tấn công!" - Duh? So you dive for cover and find yourself impaled on several sharp spear-like sticks embedded in the ground. "Lạy Chúa tôi!"[1] - you have just made the worst possible mistake. Because it's an American attack, you're "Charlie", and you just jumped on your own trap! "Người ngu dại!"

No, no! This is only a metaphorical scenario. God forbid! But such gruesome examples lead us to the extremely titillating subject of this article: Punji sticks.

A punji stick is a multi-purpose Bamboo stake, often carved into the shape of a guide-arrow which leads to a booby-trapped pit studded with sharpened stakes. Guide arrow punji sticks were commonly painted with red, green and yellow stripes, much like candy canes, to better attract the interest of sugar-starved US soldiers. The soldiers would innocently follow the arrows, thinking they might lead to a "Gingerbread Hooch". The punji sticks themselves - usually coated in baser substances, such as Cobra feces - were used both as guide arrows as well as sharp-stakes, and were a primary weapon in the arsenal of the Vietnamese Army's Charlie-brigade during the Americanization of Vietnam. America's subtraction techniques proved invaluable in culling the global population; yet their noble actions were befuddled, literally at every step, once the local population introduced punji sticks into the fray.

This tug-of-war operated under the classification "Police Concert in S.E. Asia", played from 1959 until 1974[2], before the band finally reformed back in the UK. But the Vietnamese victory cannot be attributed to the absence of corny music alone - certainly the noble punji stick holds a hallowed place of honor in the hearts of vainglorious Vietnamese nationalists, not to mention poking a god-awful hole in the foot of many an unwilling and out-attritioned US draftee.

Uses during the Vietnam War

Punji sticks being deployed by the wily VC. Slipping is not an option.

Punji sticks are often placed on the ground, and usually deployed in substantial numbers in a line of arrows leading to ultimate doom. Other uses include placing sharp punji sticks as stakes in the ground. Punji sticks were quite often used in the preparation of an ambush.Viet Cong (VC) soldiers, waiting for the US soldiers to pass, would place hundreds of punji sticks in the areas where the surprised enemy might be expected to take cover. Thus soldiers diving for cover would be in for a really nasty surprise.[3] This was also cited as another cause of Post-Traumatic-Stress-Syndrome in US soldiers caught in ambushes, because they were faced with the hopeless choice of either getting shot or jumping on the punji sticks. Of course, there was always the third choice of refusing induction in the first place. But that required courage.

Types of holes known to contain one or more punji stick

Apart from laying punji sticks on the ground as guide arrows, sharpened punji sticks would also be stuck in holes (trou de loup). For example: in a pit covered in grass, in a ditch covered in weeds, in quicksand covered in sand, in mud covered in water, or in poontang covered in Asian 'peach fuzz'. The fifth 'pit-fall' was the reason why most US soldiers claimed to be gay in Vietnam - except for the really brave ones. In fact, being fearless in Vietnam was not about war, it was about daring to shag a sexy VC babe and coming out alive afterwards. Such heroic survivors were called "Two-Timers".[4]. 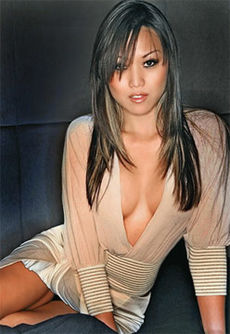 VC babe. Does she have a punji stick inside?

When the punji stick popped out of the ground and found the soldier standing there, the point of penetration was usually in the foot or, occasionally, into the rectum. Punji sticks were not meant to kill the soldier who stepped, fell, sat on, or toyed with them; rather they were designed to tie up his unit while the unlucky schlep gets choppered out to a medical hooch - often under intense indigenous automatic weapons and small arms fire. Punji Sticks were also used in Vietnam to complement various defenses, such as army regulation lies, broken promises, international uproars, and political bullshit.

Often the sharp tip of the punji stick would be dipped in some form of drug or poison. This was meant to infect, intoxicate, tickle, humor and/or disable the victim, potentially leading to incapacitation. Following are the most common substances used by the locals: Cobra feces, Belladonna, Spanish fly, rabid dog stool, and STD-infected blow fish urine. Some of these compounds will ruin your sex life, some of them will actually enhance your sex life, while others are just downright horrendous. If you ever get offered a chance to try a punji stick (first one is free), remember Nancy, and just say, "NO!"[5] But if the VC offer you a 'Buddha stick', remember, don't look a gift-horse in the mouth. If you can't beat them, then join them.

Ever since American sports commentator Howard Cosell vowed never to cover another bloody mismatch, the popularity of punji sticks has gone down dramatically. In the 21st century a punji stick is practically worthless in the West. If you don't believe it, just try to sell a feces-covered punji stick in downtown Manhattan...good luck even giving it away. Never-the-less, punji sticks are still listed in today's Army Manual, along with the warning, "If you happen to step on a punji stick, DO NOT STEP ON IT! - That's an order!" - Signed: Your C.O., Mr. Barak Obama.

Since the end of the War, punji sticks were converted to use as weather vanes on the farms of Vietnam. It has become a tradition in all Vietnam provinces that punji stick weather vanes always point WEST as a constant reminder to any lost or love-struck US trooper still dreaming of heading home. Apart from their use as weather vanes, punji sticks are still used by the Vietnamese jungle people to trap and impale wild pigs or still missing American MIAs. It is generally accepted throughout Vietnam that MIA meat is superior to dog flesh, and is by far the gourmet food of choice. This may of course just be a Vietnamese joke, but knock three times and ask for 'Alfred E. Neugan'. You may be in for an absurd surprise. Vietnamese food is catching on in the West, although few Americans question the ingredients. 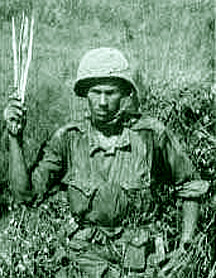 Punji sticks aren't very complex. They are simply a sharpened bamboo stake. Not exactly high tech, yet they beat high tech all to hell. U.S. Commander William Westmoreland dropped more bombs on Vietnam than all of the ordinance used in WWII, yet he was still whipped by 'savages' with sharp bamboo sticks. That's almost impossible to comprehend, but, if anyone could do it, that would have to be General Westmoreland. The punji stick arrows and stakes themselves are believed to be the brain child of Sir Nygun "Punji" Van Cleefh, OVE after he read the works of A. A. Milne and the Winnie the Pooh stories. The 'pooh sticks' in that story therefore were changed from a harmless game for idle children into the deadliest weapon the American army had ever come across. Punji decided to call them 'Punji sticks' but his claims were dispute by the estate of Milne on the grounds of copyright, though the inherent absurd idea of confusing Pooh and Piglet with the Viet Cong didn't prevent Disney trying to sue the Vietnamese government.

In a separate case, the estate of Fred Flintstone and his 'jungle friends' - to whom Mr. Flintstone traded the secret of 'fire' for the copyright-in-perpetuity on punji sticks - also claimed to own the patent on Punju sticks. But, legally speaking, Flintstone was merely a 'toon', endowed only with those rights to which a toon is entitled. Meanwhile, Sir Nygun holds the Vietnamese patent, which is written on rice paper using invisible ink for fool-proof political transparency.

Question: Which is a more humane trap?

Answer: Punji stick puts a hole in your foot, but a Claymore mine blows off your legs.