The manifestation after the detonation of the panty shot

Panty Shots are a type of ammunition that can be fired out of various cannons, rifles, machine guns, butts, catfish, and confused lesbian Athiests. Panty Shots are generally 330 mm in size and weigh about 53 kilos. (Myth of a smaller, burst-fire, armor-piercing projectile weapon firing 9mm rounds has been greatly misconcieved). The effects of being hit by these little fuckers are devastating. When the shell detonates, a schoolgirl with large, glazed eyes, a short mini skirt, and white lace panties manifests and brutaly flashes the target until their brains turn into a quite delectible shit sundae.

Usage of the Panty Shot[edit]

Panty Shots are highly illegal in all parts of the world, with the exception of the Isle of Man. The panty shot was originally invented for usage on the U.S.S. Gratuitous Anime Panty Shot, but when word (among other things)spread of its existance, it immediately became a hot item among various Terra-ist and criminal organizations. The only person theoretically capable of surviving a panty shot is the possible lovechild of Mark Twain and Oscar Wilde, but no one has ever got close enough to test this (the deaths of many Bothan agents have so far been futile). However, it has been proven that not even the legendary Mr. T could avoid succumbing to the panty shot's amazing destructive force. 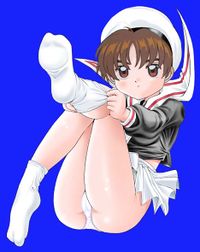 Another manifestation after the detonation of the panty shot

Panty Shots can be fired from a variety of cannon. Different types are used depending on the location, and target being fired upon. They include, but are not limited to: