That's an okra, not an orca!

“What a killer Lube Tube!”

~ Oscar Wilde on Willy and his tube.

The Orca (better known as the Killer whale) is a large black-and-white whale-looking thing that lives in the ocean. Despite its popularity, we still know very little about this mysterious creature.

The truth is that orcas were descended from aliens of some planet. The creatures have always been strict carnivores, but on Neptune, their diet consisted of extraterrestrial life. The orca numbers soon increased to the billions and they ended up wiping out all signs of life on the planet. All that eating also made them obese very big. Because of their huge size and overpopulation, the planet could no longer sustain orca life, and it crumbled into many chunks. Orcas living on those chunks of the planet were sent to earth, where they ended up in the oceans which were created by craters left by the chunks' catastrophic impact on earth. One of the chunks ended up in our solar system and became known as Pluto.

Orcas prove to be beneficial to suicidal penguins.

Most people would see the orca as a black-and-white whale. However, science has uncovered that these so-called "killer whales" are technically whales at all, but extremely large blubbery muscular dolphins. Even Wikipedia says so.

For those without comedic tastes, the so-called experts at Wikipedia have an article about Orca.

Just to clarify, orcas see themselves as being muscular, so we shouldn't dare call them fat unless we want to get eaten alive.

Orcas are commonly referred to as having a two-faced attitude. To you, an orca is a friendly creature at the Marine Park that can perform cool tricks. To someone else, an orca is a bloodthirsty carnivore that kills innocent seals for food and/or pleasure. Like most dolphins, orcas are evil geniuses that make themselves seem cute and playful to humans while they plot the right opportunity for vengeance. Orcas are indeed evil, but in a mischievous way. You could tell from how they would make a big splash that would get everyone all wet. 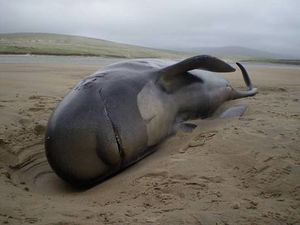 And beaches prove to be beneficial to suicidal orcas.

A group of orcas is called a pod. A very small pod, consisting perhaps of a single family, is called an i-pod. Sometimes very large agglomerations of orcas gather, often in the waters off of Seattle. Such great comings-together are characterized by ill-conceived, rambling whale songs and are referred to as a "Whalapodlooza" or sometimes "Burning Whale." Also of note are roving groups of frat-boy, wannabee orcas known as "pseudo pods."

Orcas prefer to be referred to as killer whales by outsiders. In formal or academic situations, the term Orcinus Orca-American is often substituted. Orca is best left to killer whales themselves. Among their own, the "o-word" is a term of endearment and an affirmation of one's belonging in the community. This can be seen in the lyrics of a whale-song recorded on the west side of Lake Huron:

"We in the current with a .40 and fish roll
Ready for the blow hole
Heavy drinkin', we ain't got good sense
My pod so tense, orcas so dense
I see through the life you invent
Slow up on how you orcas vent
You orcas ain't representin' shit
I represent School Seal Killers
Detroit orca, my orca, what?"

Whether referring to an orca as a killer whale, an enormous killing machine the size of a PT boat, or as "just a big dolphin" is truly wise, especially if said killing machine is hungry and within earshot.

Orcas will marry only within their own immediate social group. Orca families traditionally consist of two parents and two children. In recent times this "nuclear family" pattern has become fragmented and rare. This has resulted in considerably reduced tensions over the potential for a hot war between orcas and sea lions, as well as the publication of such texts as Namu Has Two Mommies.

At the age of 4, a young orca has to kill and eat its own mother in order to gain the title "killer" in front of "whale", Otherwise it has to go by the name of "Pussy Whale".

As previously mentioned, orcas follow a carnivorous diet. Orcas are well known for grabbing seals, tossing them in the air, and eating them. Orcas also commonly eat penguins, mostly because they could never find any chicken restaurants suited for their kind. There are some orcas that just can't control their eating habits and want to eat as much as possible, so they attack and eat larger whales.

It should be noted that orcas are the real kings of the ocean. One orca has been documented eating a great white shark after pwning him badly. Orcas will even eat their own dolphin cousins, probably because they made fun of them for being fat (remember that they prefer the term "muscular"). There probably isn't anything that orcas won't eat. Except maybe...brussel sprouts.

Orcas come in three distinct varieties, or "races." Though of the same species, they do not intermarry, they speak different dialects and they rarely sit at the same table in the cafeteria.

Residents are the only whales that build houses, tend lawns and form social clubs for the purpose of excluding the other orcas. This makes the residents feel powerful and better than the other orcas. Other orcas are often jealous of residents, and themselves believe that they are not as good as residents. This attitude will be changed when the revolution comes, and the residents are the first orcas with their dorsal fins against the wall.

Transients roam the coasts in gangs, and are ruthless and cruel in their feeding habits. They eat mostly marine mammals, and have been known to throw them into the air or break them in half with powerful blows of the fin before consuming there pathetic, bloody, and horribly deformed mammal remains. This radical behavior is largely thought to be adopted from the barbaric actions of semi-mentally unstable European football fans or supposedly 'civil' rugby fans -- take your pick. It is thought that this may largely be responsible for the name "killer whale" as well as most incidents of whale-on-whale violence. Yeah, them transients is some bad orcas, yo.

Offshores swim the deep oceans and feed mostly on fish. They tend to be smaller, but more heavily scarred than other orcas. Their pods are larger than others, consisting of up to sixty individuals. Many marine biologists believe that they feed on sharks in the open ocean waters. That's right, you heard me, sharks. Marine biologists also believe that transients better just shut the hell up about their seal-killing badness when these hard-core, shark-eating motherfuckers swim by.

One can see by these descriptions that racial divisions between orcas cannot be reduced to simple black and white. 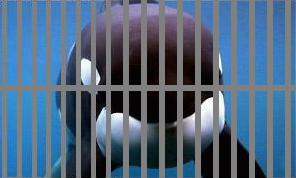 Orcas are very popular in society today. Most of these orcas reside in Marine Parks performing tricks. Perhaps the most popular orca would be Shamu, who is famous for being able to perform all sorts of incredible tricks despite all that blubber muscle. Willy, another notable orca, desires to escape his aquatic prison and be Free Willy. And let's not forget the famous celebrity, Orca Winfrey.

There are also some orca-related films. One named "Okra the killer whale" tells the story about an evil vegetable killing everyone in sight. The film was criticized by critics because it was clearly a rip-off of Jaws. Another orca-related film named "The Killer Whale Inside Me" revolves around an escaped mental patient who kills and eats innocent seals thinking he is an orca in a human's body. This film was well-praised by critics for its original plot.