From Uncyclopedia, the content-free encyclopedia
(Redirected from Olympia)
Jump to navigation Jump to search

For those without comedic tastes, the so-called experts at Wikipedia have an article about Olympia.
“Let them eat vinyl.”

~ Actual Courtney Love lyrics from the song "Rockstar" directed at K Records and the indie wankers of Olympia.

Olympia, is a city which began as a quaint logging community and blossomed into a quaint wanker community.

The City of Olympia is known as an incubator of the "riot grrrl" and indie rock movements. These musical genres are discussed on internet forums around the world. This underground but completely transparent knowledge is read and repeated by people who try to be cool but end up saying deadshit things to impress their friends such as "I only listen to Kings of Leon's early albums".

Being cool is an art form in Olympia which involves picking a segment of the population, ridiculing them and then smoking pot and talking about being empowered. Bonus points are achieved if your clothes are unwashed and look thrown together, even when meticulously picked out.

If you try to enter one of the city's two food co-ops, it's best to be at least two months overdue for a haircut. A possible exception to this rule is to be clean-cut but flamboyantly gay.

This "sporty" hippie is wearing the latest fashionable tunic purchased at Traditions.

Loathed by some and hated by others, Olympia hippies can be smelled even from I-5 when driving into the city. There are several species of hippie in Olympia including "new to town hippie" (seen smiling with acne and dreadlocks); "been around a while hippies" a.k.a. "feral hippies" (seen frowning with acne and dreadlocks); "sporty" hippies (seen confused looking with carabiners, bicycles, acne, dreadlocks and jock itch).

Male hippies are required to have beard growth with remnants of yesterday's burrito stuck in it. Female hippies are not accepted by their peers unless their leg hair is of equal or greater length than their armpit hair.

Hippies are happy until shown a picture of former President Bush or if you take their drugs away. These actions will trigger a highly agitated state which can only be cured by giving the hippie a tofu burrito with ganja butter and a gourd of yerba maté.

Hippies don't like to be told that the biggest source of waste for edible food and one of the causes of famine in the world isn't biofules but is in fact feeding their dogs and cats (this is funny but true). Telling this fact to a hippie will get you strangled with a hemp necklace. 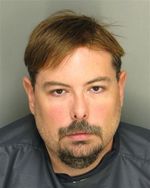 This state employee was later fired for looking too healthy and ambitious.

State employees in Olympia are more closely related to the resident hippies than anyone cares to realize or admit. Both are exceedingly lazy and poorly dressed. Whereas hippies choose to go with the unwashed look, state employees tend to favor the un-ironed look. For men, Dockers and a cell phone holder are required by the state dress code. For women, anything will do as long as it looks frumpy and gets caught between fat rolls.

Also like hippies, state employees suffer from a sense of entitlement which has no bounds. Some of these entitlements include "resting rooms" for nap time, leave without pay, pay without work and work without work.

The first law ever made by a state employee took all the land of Olympia from the local Native Americans and gave it to state employees and their families. When the local tribes protested, they were given grande Frappuccinos from Starbucks and told to drink up. Little did the tribespeople know, they were secretly being infected with a disease known as "fat consumerism". It was then easier for the state employees to steal the land, because the Native Americans couldn't move without the help of an electric scooter.

Feminism is not just a study of feminist theory, it's a way of life in Olympia. Successful feminists will: 1.) Quiz men about if they pee sitting down. 2.) Report pickup attempts as sexual assault. 3.) Improbably still think babies are super-cute but only if wrapped in an over-the-shoulder cloth baby wrap and then only after confirming it was a water birth with both a doula and midwife present.

If you ever meet an aggressive feminist who asks you about peeing standing up, it's best to reply with the eternal joke: Adam and Eve were in the Garden of Eden and God asked them: Who wants the ability to pee standing up? Adam jumped at the opportunity - "We do, men!" And God said: "Ok, women you get multiple orgasms."
Feminists will reply with a tirade about Warren Beaty and the 'male gaze'.

Every year, the students of The Evergreen State College celebrate May Day by throwing the washing machines they should have used onto Highway 101, angering residents and delighting Whirlpool.

The Evergreen Beach is a 1.5 mile sandy stretch widely known to be a nude beach. The beach is a popular pick-up spot for sexual predators and/or the visually impaired.

Traditions Fair Trade - 300 5th Ave SW, Olympia, WA 98501: This is the epicenter of Olympia's exclusive social life (the former epicenter was Batdorf & Bronson coffeehouse until it became "too corporate"). "Traditions" as it's commonly known is housed in an unimpressive building near the shore of Capital Lake and is invariably packed to the rafters with hippies and single parents. Kids here are encouraged to run around unsupervised and break anything in sight.

Perfumes and colognes are expressly outlawed in Traditions due to them making people smell too good. You will be asked to leave and forcibly ejected if you are wearing a conventional fragrance. If you are in the middle of a meal, a good retort would be to state that you are wearing an "essential oil" then finish your food quickly and leave. 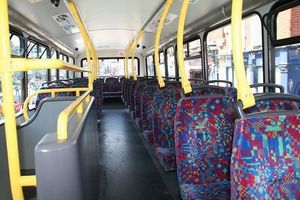 The Dash at peak hour.

Olympia's public transportation is operated by Intercity Transit which runs a free shuttle called The Dash. This free service is widely claimed to be the most visible waste of money in the city after state employees. The Dash plots a course which runs up and down Capitol Way to ferry state workers between the state capitol, the Farmer's Market, and a number of cafes and restaurants where state employees take three hour lunch breaks and two one-hour long coffee breaks each day. Rather than running North-South through the city, which is the direction most traffic goes, The Dash runs East-West which helps to explain why it is seen to be empty or nearly empty almost all the time. The Dash has tinted windows to obscure this fact.

The Olympia Farmers Market offers organic fruit and vegetables, local crafts and a covert bodega which sells magic mushrooms and weed. Even when its fucking cold in Olympia, families proudly show off their kid-popsicles, and lesbians-until-graduation try out hand-holding to increase their social status. It is considered sacrilege to visit the Olympia Farmers Market without buying overpriced bread.

Keeping fit in Olympia is not easy, because most of the time, it's fucking cold. The weather can be effectively negated however by the use of tight bike shorts which function just like a wetsuit. The shinier and tighter the shorts, the more protective power they offer against the elements.

Olympia residents like to get maximum mileage out of their tight shorts by stretching at any giving opportunity. The best place to effective expose oneself is usually at a four way traffic signal. All stretching must be done with a smile whilst simultaneously looking around to see who's watching.

Keeping it local is very important to Olympians. The importation of goods from other cities and countries is a significant source of carbon emissions and is expressly outlawed. This is why local supermarkets don't even bother to stock Olympia beer which is now manufactured in Irwindale, California; it simply wouldn't sell by the case-load or be popular at college parties.

The fashionable tunics (pictured above) and other goods which are said to be fairly traded and appear on the shelves at Traditions must be locally manufactured replicas of imported goods, as the purchase of these goods is widely regarded in Olympia as wholesome. Items imported from other countries would never be so accepted because of the carbon burden they entail.

The website buyolympia.com sells "awesome handmade items" including environmentally (un)friendly vinyl wallets and a few books about shopping locally which can be shipped to you worldwide (even Olympia) as long as you have a plastic fantastic Visa, MasterCard, American Express, or Discover card or a PayPal account. In keeping with the spirit of community, environmentalism and local commerce, buyolympia.com is based in - oh wait, they moved to Portland, Oregon.