From Uncyclopedia, the content-free encyclopedia
(Redirected from New millennium)
Jump to navigation Jump to search

What should have happened

New Year's Eve, 1999, was supposed to be as far as it got for humanity. Thanks to short-sighted computer programmers, automated missile launching systems, some form of bug, and the accurate prophecies of Nostradamus, this was the big one; the proverbial "it": we were all going to die. Except we're still here some years later, as evidenced by the fact that you are reading this article. So what was supposed to happen, why was it inevitable, what actually did happen, and why was it all a bit of an anti-climax?

What, exactly, was The Millennium?

Good question, and a great place to start: The Millennium was January 1st, 2000 - a hugely significant date in the history of man. It was, after all, 2000 years since the planet was formed. Two thousand years had passed since the big bang, and the universe was looking to even the score. Either that, or fundamentalist Christians are wrong.

So, it was exactly 2000 years since the birth of a guy who several major religions believe was quite important. Except that's supposed to be December 25th. Or any one of about half of the days of the year, according to various theories. And no-one's really sure they got the year right either - current theories put Christ's birth anywhere between 8 BC and 6 AD. This quite obviously makes "2000" a very special number to us modern types.

However, everyone in the world agreed that it was exactly 2000 years since something important happened. Well, except for the Chinese, who have their own calendar. As do the Jews. And Hindus, Muslims, Celts and a whole bunch of other people. But we don't really care about them, being in the Western hemisphere.

However, on at least one calendar, it was going to be 2000 years since that particular calendar had started, and that could spell only one thing: trouble.

What was supposed to happen? 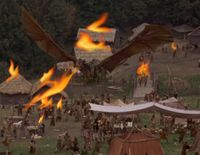 One of the more cheerful predictions involved dragons

Experts were actually a little unclear on this. Oh, they all agreed something bad was going to happen, but they disagreed wildly as to what. Standard theories included:

Non-experts ventured the theory that "these things will sort themselves out and be a lot less than they're made out to be, they usually do". They were denounced as not being expert enough, and their fashion sense was mocked for good measure.

The two common threads in all credible theories were clear: computers, and the end of the world. However, big businesses and military leaders stressed that there was no need for panic: they had a plan. That plan turned out to be "throw a bunch of money at the problem at the last minute, and hire a bunch of contracting programmers to fix it". This plan had a significant effect - on the bank balances of a lot of contracting programmers. But as the Millennium rapidly approached, it seemed all hope was lost - the experts gloomily agreed that despite this brilliant strategy by big businesses and the military, there was no way every computer system could be overhauled in time, and all it would take was one simple error to cause a catastrophic chain reaction. We were, they concluded, absolutely fucked.

What was the public reaction?

The vast majority of public, meanwhile, decided that the problems of a few techies were no concern of theirs, laughed off the predictions of imminent doom from the experts, and decided they were going to party! After all, New Years are always something special, and this was, like two thousand New Years! Plans were laid months in advance; drinking binges mapped out like military campaigns; women had their outfits laid out, changed, discarded, re-planned, despaired of and completely replaced - nothing was going to stop the show!

There was, it should be noted, a hardcore of survivalists who took the warnings very seriously. These selfless people took it upon themselves to safeguard the future of the human race by taking sensible precautions. They took to the mountains, hiding themselves away in deep bunkers with plentiful supplies, ready to remain secure for as long as it took to outlast the inevitable fallout from the coming catastrophe, subsequently emerge to re-populate the planet and grow vegstables. The fact that the overwhelming majority of such survivalists were men, thus making the re-population phase of this plan somewhat tricky, didn't phase them at all. In fact, they seemed optimistic about it - one was even heard to observe "even if there's only one woman left, with a couple of thousand survivalists, that's still going to represent a significant increase in my chances of getting laid!"

The most expected case, an even bigger disappointment would come during that year's election.

Not much, actually. On the party front, most clubs, pubs, bars and drinking dens had put entry and drink prices so high that most people stayed home to watch the fireworks on TV. On the fireworks front, the only ones that happened were of the organised variety. Unfortunately, there was not one single Nuclear Missile, no mad computers laying the world to waste, no killer robots. Nothing. Go figure.

Of course, many survivalists don't know this, as they don't have access to the internet, or any credible news source. So they're probably still out there, waiting for the time when they will triumphantly emerge to claim the Earth as their own or 2012. Good luck to them!