From Uncyclopedia, the content-free encyclopedia
Jump to navigation Jump to search
This article may be Overly Serbian. Most of the world will not understand the humor of this, particularly concerning references to the far inferior Croats and Bosniaks, the thankless Kosovan leeches, the lazy Montenegrins, or delicious plum brandy. Do not attempt to remedy this.

Monday Night Genocide, is a Serbian TV-show that airs on Радио Телевизија Србије (Radio Television of Serbia) every monday night. Being the Serbian answer to the popular American show "Monday Night Football" (an American football show airing monday nights on ABC), Monday Night Genocide deals mostly with the recent events of Serbia's national sport, genocide. In centre of each programme stands one of the night's matches in the NGL (National Genocide League). 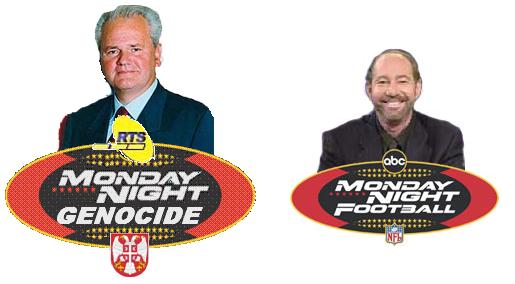 The show has been airing every monday night on Serbian television ever since the successes of the Serbian national genocide team began during the Balkan wars around 1900.

Many readers of this article, who are unfamiliar with Serbian television may think "Hey! Television wasn't invented until the late 1920's!" However, since the glorious country of Serbia is such a glorious country, it's engineers were a quarter of a century ahead of their Scottish colleague John Logie Baird.

Monday Night Genocide had it's greatest success in the mid-1990's, when genocide was the undoubtedly most popular sport in the Balkans, and Serbia's national team the world leading in the sport. About 74,678,940 Serbs worldwide watched the show every week, making it the most viewed TV-show ever in Serbia. This great success made it possible for the state to finance the national team's ongoing tour in Bosnia, Croatia and Kosovo.

Among the hosts that Monday Night Genocide have had over the years, Slobodan Milošević is probably the most famous. In fact, his starring in Monday Night Genocide made him so popular that about 120% of the population of Serbia voted him president in extremely free, democratic and fair elections.