For those without comedic tastes, the self-proclaimed experts at Wikipedia have an article about Monday Night Football.

Monday Night Football is a 3-hour long project that consists of beer, car, and insurance advertisements that is designed to test if large quantities of American people can have their IQ lowered to below absolute zero. 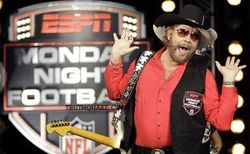 The opening scene of Monday Night Football long featured Hank Williams Jr. singing "Are You Ready for Some Football?" with scenes of random patriotic fighter jets that cost about 15 trillion dollars each and that serve no other purpose as well as the the launching of two stadium sized helmets of the two opposing teams by ICBMs into space just so they could slam into each other once for dramatic effect. The launch and the production of these helmets turned out to be equally expensive since the teams playing change every time, and therefore, a new NASA launch must be scheduled every week to get the shot of the epic collision in space. Cameras were installed in the International Space Station for this purpose. The falling debris from the reentry of these helmets kill over 9000 people who don't watch Monday Night Football. During the actual airing of this introductory brainwashing, the American's unanimous scream of,"NO SHIT I'M READY FOR SOME FOOTBALL! JUST START THE FUCKING GAME!" is heard worldwide. Americans may skip this entirely and revert their attention back to Fox "News" until the game begins.

During the pregame, football players are interviewed. A typical interview may go like this:

Face-lifted reporter: So what's it going to take to beat that other team?

Face-lifted reporter: All right, we're out of time. Thank you "name of player."

Football Player: Well you know. It's no problem. And you know...

In between commercials, there is a bit of actual game play. This is generally when Americans take their bathroom break and grab a new can of beer. A new commercial break begins under the following conditions: 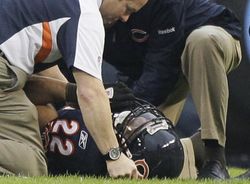 The injury timeout is by far the stupidest excuse for stopping play.

Halftime is a twenty minute bombardment of commercials that allows player to rest from playing the occasional five second interval of actual game play. Many Americans switch back to Fux News, which is surprisingly more effective at lowering IQ. This is when Americans spend a few minutes trying to remember what the fuck they're doing, and after exhausting their brain, they resolve to just go get another can of beer.

American football is by far the most boring sport when it ends. There is little cheering, and the opposing coaches shake hands. The score is displayed on the television for about 1.7 seconds until commercials resume. By this time the majority of the viewers have either fallen asleep, become drunk, or realized that it's a fucking Monday! Aw shit! All they wanted to do was watch a few commercials and some perfectly straight men in tights bang into each other and now they have to go to work. (Starving children in Africa start to cry in sympathy)

In conclusion, Monday Night Football is successful in lowering the IQ of Americans to below absolute zero because of the day of the week, the tendency to switch to Faacs News, the mental capacity of the players, and the failure to realize that they are getting mind raped by commercials.